The 4-2 serve receive is the most basic volleyball offensive system. In a 4-2 system you have 2 setters and only 4 hitters. The two setters play opposite one another on the court. The setter that is on the front row sets for that rotation.

With a 4-2, it's much easier to adjust the formation because the setter lines up near the target because they are always a front row player.

Basic strategies for a 4-2 serve receive are...

The following are basic 4-2 rotations. If your team has primary passers, plays a libero, or defensive specialists then adjust your serve receive accordingly.

The setter is Right Front. The Outside Hitter backs up to help out with passing.

The Setter is now Middle Front. If needed, the other front row players can back up to help out with passing the serve.

This is an advanced 4-2 serve receive rotation for when the setter is Middle Front. The front row players are stacked to the left side of the court. The purpose is so the Outside hitter can more easily get positioned outside ready to hit.

The setter is Left Front. The other front row players are ready to hit middle or weak side.

Again, this is an advanced 4-2 rotation. The setter is Left Front and the other two front row players are stacked to the left side of the court. Again, the purpose is to run an effective play for the outside and middle hitters.

Remember, these are just examples of 4-2 serve receive rotations. How you line up depends on many factors such as your teams playing level, experience, substitutes coming in for back row players, and using a libero.

All these factors need to be considered when thinking of running a 4-2 offense. 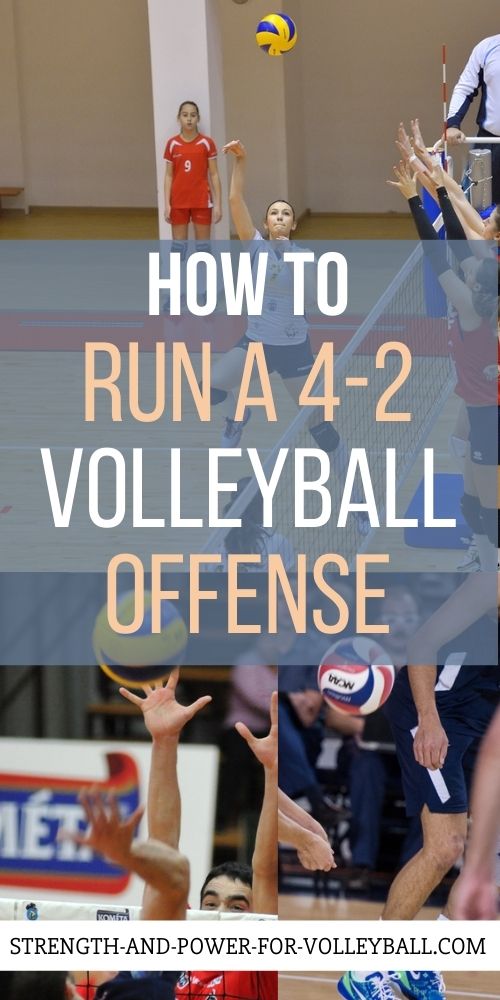