Volleyball History
History, Creator, and Object of the Game

Volleyball originated in the United States in 1895 as a blend of basketball, baseball, tennis, and handball.

Today, volleyball has spread to 211 countries around the world.

In 1895, William G. Morgan, an instructor at the Young Men's Christian Association (YMCA) in Holyoke, Mass.

Morgan created the game of volleyball, at that time called mintonette.

In 1896, the first official game of Volleyball was played at Springfield College.

In the year 1900, Volleyball was popular enough that a new ball was customized for the sport.

This international signified the start of the Volleyball era. 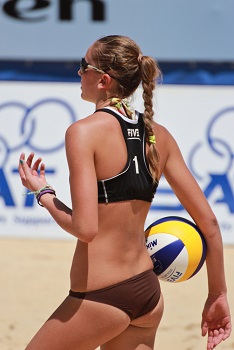 In 1907, Volleyball was presented at the Playground of America convention as one of the most popular sports. This was the first credit the sport received, and helped to further the sport recognition.

Over the next five years volleyball spread to Central American countries.

In 1913, volleyball was held in the Far Eastern Games. This was the first official volleyball competition.

In 1916, volleyball had arrived in YMCA Brazil and South America. The set and spike was first executed in the Philippines. This offensive system altered how the game was played. For the first time the ball was set in a high trajectory and then spiked by a teammate. The Filipinos created the kill, known in United States as bomba. The bomba was named after the attacker called the bomberino.

Volleyball at the YMCA

Since 1928, the USVBA, now known as USA Volleyball (USAV), has put on national men's and senior men's (age 35 and older) volleyball championships every year except during 1944 and 1945.

Women's USVBA divisions started in 1949 and have been growing ever since.

In the late 1940s, some European national federations began discussing the need for creating an international governing body for the sport of volleyball.

The FIVB was founded in Paris, France in 1947. Initial discussions eventually lead to the installation of a Constitutive Congress in 1947. Fourteen national federations representing five different continents attended meetings where the organization was officially formed.

One of the main goals of the 1947 Congress was achieved two years later with the establishment of the first international major volleyball event, the World Championship.

In 1952, a women played in FIVB tournaments for the first time in volleyball history.

Inventor of Volleyball
Do you know who invented volleyball? William G. Morgan and the history of volleyball, origin, YMCA, object of the game, scoring system, James Naismith...