History of Volleyball
Evolution of the Game Organizations

For the first time in the history of volleyball, volleyball was played in the Pan American Games in 1955.

In 1957, volleyball was designated as an Olympic team sport by the International Olympic Committee (IOC).

In 1959, the International University Sports Federation (FISU) had volleyball be one of the eight competitions held in first University Games in Turin, Italy.

In the 1960's, new volleyball techniques were developed. Off-speed hits, open hand tips, forearm passing, blocking at the net, and defensive plays such as diving and sprawling become a big part of the game. 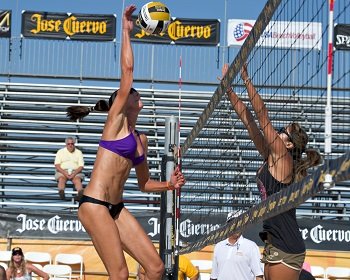 With the FIVB already having its own world championships, the FIVB directed its attention to the Olympic Games. Thanks to the Bulgarian Volleyball Federation, a tournament took place in Sofia in 1957 during the International Olympic Committee meetings. As a result of this event, volleyball became an Olympic Sport.

In 1964, volleyball was first played in the Olympics in Tokyo. Volleyball became a part of the Olympic Games, which allowed it to grow even more. Also, in the 1964 Olympics, the Japanese used a volleyball that consisted of a rubber casing with leather panels. A similar ball is used in modern volleyball competitions.

In 1969, a new international event, the World Cup was introduced. The World Cup would be turned into a qualifying event for the 1991 Olympic Games.

In 1974, Japan telecasted a major volleyball event in Mexico, the World Championships.

In 1983, the Association of Volleyball Professionals (AVP) was founded by Leonard Armato. The organization started its own beach volleyball tour in the United States in 1984.

By the late 1980's, the AVP tour was growing fast due to the promotion of the sport by the professional beach players Tim Hovland, Sinjin Smith, Randy Stoklos, and Mike Dodd.

In 1987, the FIVB added a Beach Volleyball World Championship Series 1989 - The FIVB Sports Aid Program was created In 1990, a mens volleyball competition called the World League was created.

The World League is the longest and most flourishing of all the international events organized by the FIVB. The tournament is an annual event.

In 2006, prize money became a major deal with $20 million dollars being distributed amongst 16 participating teams from 5 continents. The World League is sometimes confused with the other international volleyball competitions  Volleyball World Cup and Volleyball World Championships.

In 1996, for the first time in the history of volleyball, beach doubles volleyball is included in the Olympic Games.

Major events in the 90s took place including the establishment of annual competitions for men's and women's volleyball (the World League, in 1990, and the Grand Prix, in 1993), the indication of Beach volleyball as an Olympic event (1996). These events and many rule changes in the game were made the purpose of enhancing the popularity and public visibility of the sport.