Volleyball rotation rules for how to line up on the court and what each player can do in each rotation.

Let’s first talk about the rules for volleyball overlaps.

It’s important for all players and coaches to understand the rules for overlaps.

Two big reasons you need to understand the overlap rule.

1) If you don’t know the rules, you could be called for “out of rotation”. This costs your team a point. This could happen at a critical time in the match. Not understanding the rule is a mental mistake that could be completely avoided.

2) If you don’t know the rules, your team may line up on the court in a way that is a disadvantage. For example, it’s to your advantage to have your setter near the passing target area when in serve receive. If you don’t understand what players you can overlap, then you may not line up the setter closer to where they need to be to set. By understanding line ups, you can line up your team to best way.

I would definitely spend the time learning the rules of volleyball because this is something that will help you get an advantage quickly.

It can take many hours of practice and match play to get the experience you need to be a good volleyball player. But learning the rules is something that could be done quickly and you will have an advantage over all the other coaches and players that haven’t taken the time to learn the volleyball rotation rules.

So when you first start playing volleyball, one of the most fundamental things that you need to understand is overlaps.

This the how to line up on the court during serve receive. It’s only at the moment of service contact that you need to be concerned about where on the court you are.

When starting to learn about overlaps, first understand there are 6 areas of the court.

These areas are called zones.

Zone 1 is Right Back.

Zone 5 is Left Back.

Zone 6 is Middle Back.

Each player is in a zone.

When the team in serve receive wins the rally, the team receiving rotates clockwise.

For example, the player that was in zone 2 rotates to zone 1 and now is the server.

Now, there are rules for how players must be lined up on the court in serve receive.

So, those are the side to side overlaps.

There are also front to back overlaps.

For example, the Right Front Player must be closer to the centerline (the line under the net that divides the court in half) than the Right Back Player.

The Middle Front Player must be closer to the centerline than the Middle Back Player.

The Left Front Player must be closer to the centerline than the Left Back Player.

It’s important to note that players diagonal one another don’t worry about overlaps.

For example, the Right Front Player doesn't need to be concerned where they are on the court in relation to the Left Back Player. 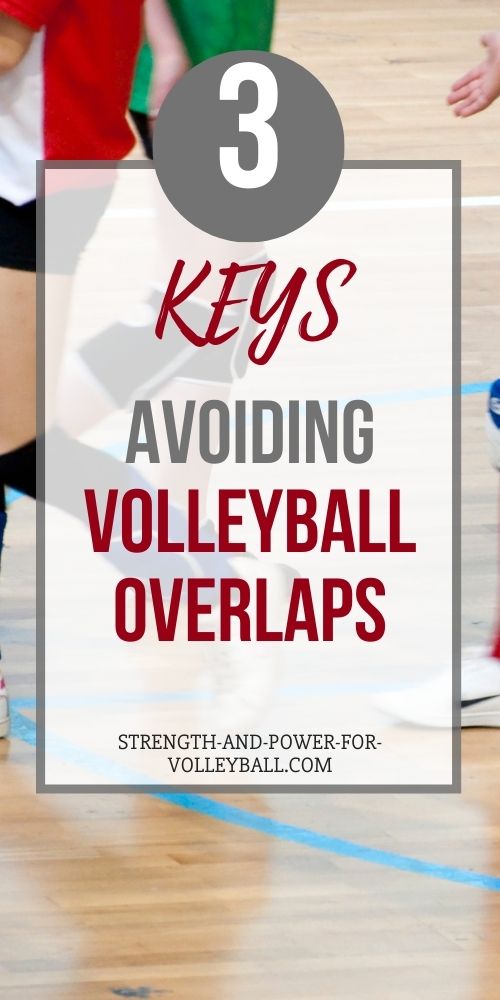