Learn back row hitting and how to spike a ball from the D position. Hitting a D ball is very similar to spiking the ball from the front row. Instead of spiking from near the net, you will be jumping from beyond the 3-meter line. This is a broad jump where you send your momentum toward the net as you spike.

Approach for Spiking from the Back Row

Where you start your approach will dictate how much power you will have for the spike.

The D Ball is a ball that’s attacked from zone 1. Start your approach a similar distance from beyond the 3-meter line as if it was the net.

It’s important to have a consistent approach. You want to start the approach from the same spot and same distance from the net every time.

Start the Approach from Off the Court

Approaching at an angle allows you to open your body up so you can generate more power.

The steps for spiking the D Ball should be the same as the approach for spiking from the right side. The only difference may be that you are broad jumping into the ball.

The first step of the approach should be toward the intersection of the sideline and 3-meter line. The goal of the approach is to position yourself so the ball is above the hitting shoulder.

Spiking the ball down the line, into the seam, or cross-court is similar to the right-side spiking technique.

Generally, for spiking, where you point and follow through is where the ball will go.

Tips for Back Row Hitting

Depending on how high you jump, your contact point for a back row spike is different than when spiking from the front row. For example, if you are a short player that doesn’t jump well, your contact point for spiking out of the back row is likely more above or behind your head. Much like a topspin jump serve, you won’t contact the ball out in front of your body. If you contact the ball too far out in front, the ball will end up in the net.

To be a good back row attacker, you need to a consistent approach and consistent arm-swing. Also, the more consistent your setter is in setting the ball to your “sweet spot”, the more successful you will be at attacking.

Remember to always take a big approach to broad jump into the ball. Create topspin on the ball so the ball will drop down over the net into the court.

It’s also important to not be goofy-footer when spiking out of the back row. A goofy-footed approach makes it more difficult to fly forward into the ball. If you don’t have good forward momentum, then you can’t generate as much power and it will also be tough to get to tighter sets. 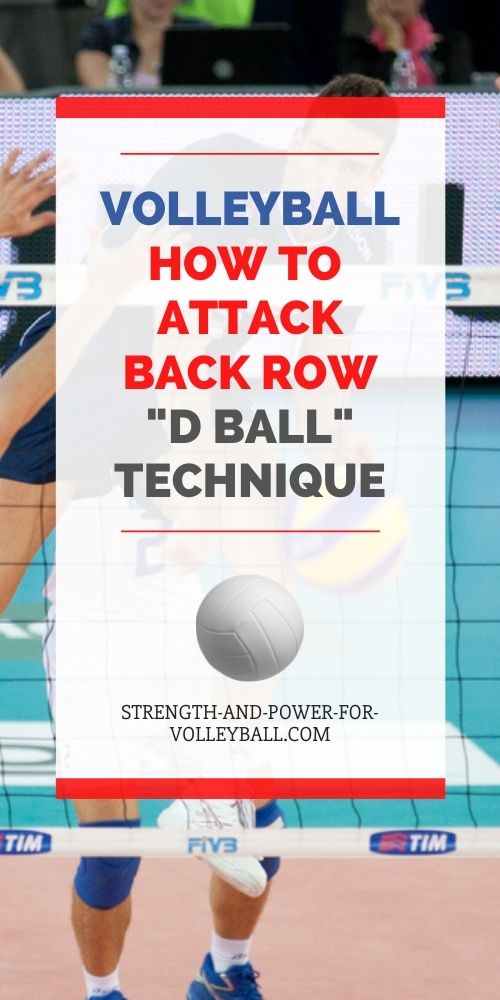