Why is the Sport So Popular?

With sandy beaches and radiant sunshine, it's not that surprising this sport has become such a popular spectator sport around the world.

Playing volleyball on beautiful beaches, under the sun in a fun atmosphere makes this sport more like a party.

Beach volleyball is also easier to understand than indoor volleyball.

From a fans perspective, in doubles volleyball it's easier to identify players. 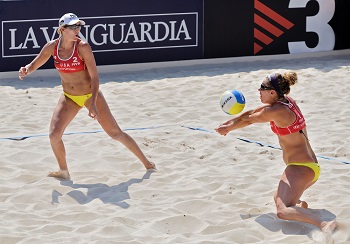 The Appeal of Volleyball at the Beach

More and more indoor players are taking their game to the beach.

To be successful on the beach, you don't have to be the biggest, strongest or the most athletic. You can win with finesse and consistency.

Being successful indoor is more about playing together as a team. For example, indoor volleyball coaches talk about concepts such as team continuity. Running plays and playing team defense is more of an art. 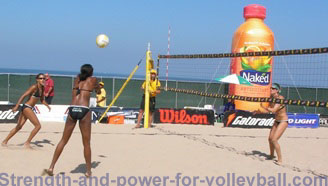 However, doubles volleyball is very different. Professional beach volleyball is a very simple game. There's no choreographing offense or defense. Either you or your partner makes the play and there's no other option. Pro beach volleyball is much less complicated. The best beach players are the ones that simplify the game the most.

Learning to Play on the Beach

When playing on the beach, being big and athletic isn't as important. Many smaller volleyball player's have found success on the beach. If you're struggling at indoor, being successful on the beach can give you a sense of power and a new found confidence. The great thing about doubles is you don't have to have specialized skills to be successful. For example, when playing sixes, if you're a guy that's only 5' 10", you could struggle playing across the front row. In doubles, height isn't nearly as important because you don't have to block. In doubles, if you want, you can spend most of the time playing defense while your 6' 8" partner blocks at the net. You can even play with a smaller partner and stay off the net and dig.

The environment
You're at the beach, need I say more? Playing in the sand with the ocean nearby is hard to beat. A great place to be on a summer day. Being outdoors in a fun environment creates a healthy relaxed attitude in people. This is a much different experience than spending hours in a gym. The beach is a great alternative to the wear and tear your body must go through from all the hours of playing indoor. Playing volleyball in the sand is much easier on your body allowing you to continue playing the sport you love for many more years to come.

Professional beach volleyball is also more fun for the spectators. Fans can dress in beach shorts and swimsuits. Volleyball at the beach is a party, dancing to music while some fans do the wave while working on their tan. 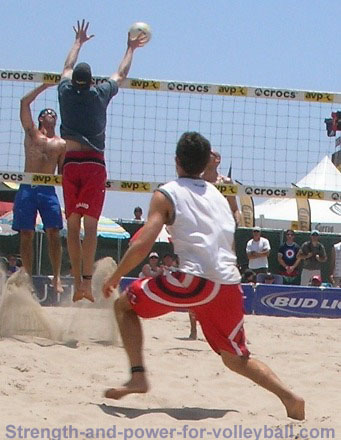 Blocking at the Net and Scrambling on Defense

More and more, indoor players are specializing. A guy 6' 9" would likely be subbed in across the front row to hit and block. At 6' 9", there's a very good chance he will be taken out of the serve reception scheme entirely.

He likely won't play across the back row, and if he does, he will likely be given limited space to defend. He will likely never set the ball unless it comes to him on a broken play. In contrast, if this same player plays on the beach, he must learn to play defense, set, and play with good ball control. With only two players on the court, you must learn these skills.

Another benefit of playing doubles is the change to your mindset. Playing on the beach is a time when players can get away from being so serious about how well they play. In doubles, you're your own coach.

You don't have the pressure you do when you play indoor and you can just go out and play for fun.

Being Your Own Coach

A lot of players like the feeling that they are in control.

They get to make the decisions on what strategy to use.

Not having a coach to turn to forces you to figure it out on your own.

This experience will allow player's to become more creative and give them confidence.

When player's go back to playing indoor, they often find it's easier to make adjustments during play. 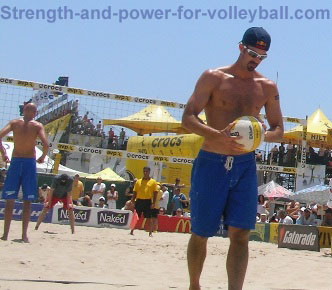 More Satisfying to the Ego

In doubles, you stand out to the crowd and you have a lot of control playing the game the way you want.

Indoor sixes is definitely more of a team sport with the focus on team success. In doubles, you get the individual attention and the focus is on you.

It's only you and your partner and it's up to you two to make plays. 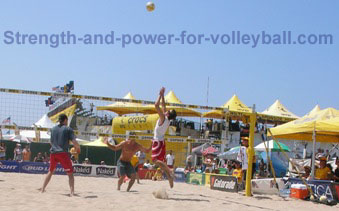 Approach Fast and Jump High to Spike on the Beach 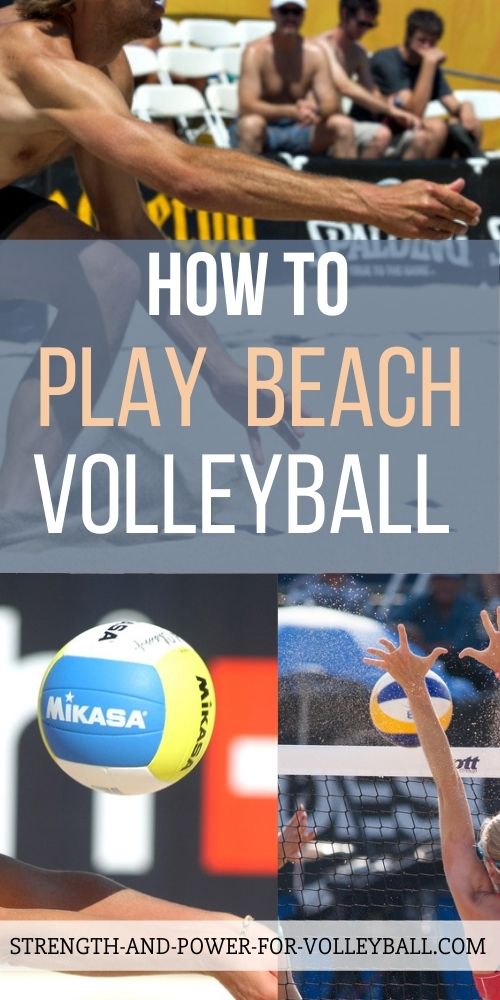