How to Spike a Volleyball
Important Tips for Better Attacks

Could you use some tips on how to spike a volleyball?

Every approach and armswing should look exactly like the last one.

Any deviation in your approach and armswing will send clues to the defense about what you're going to do.

The longer you wait to decide what you're going to do (for example, tip to the middle instead of swing hard) the harder it will be for the defense to read your hit.

It's only at the very last moment as you are about to contact the ball that you decide what to do. 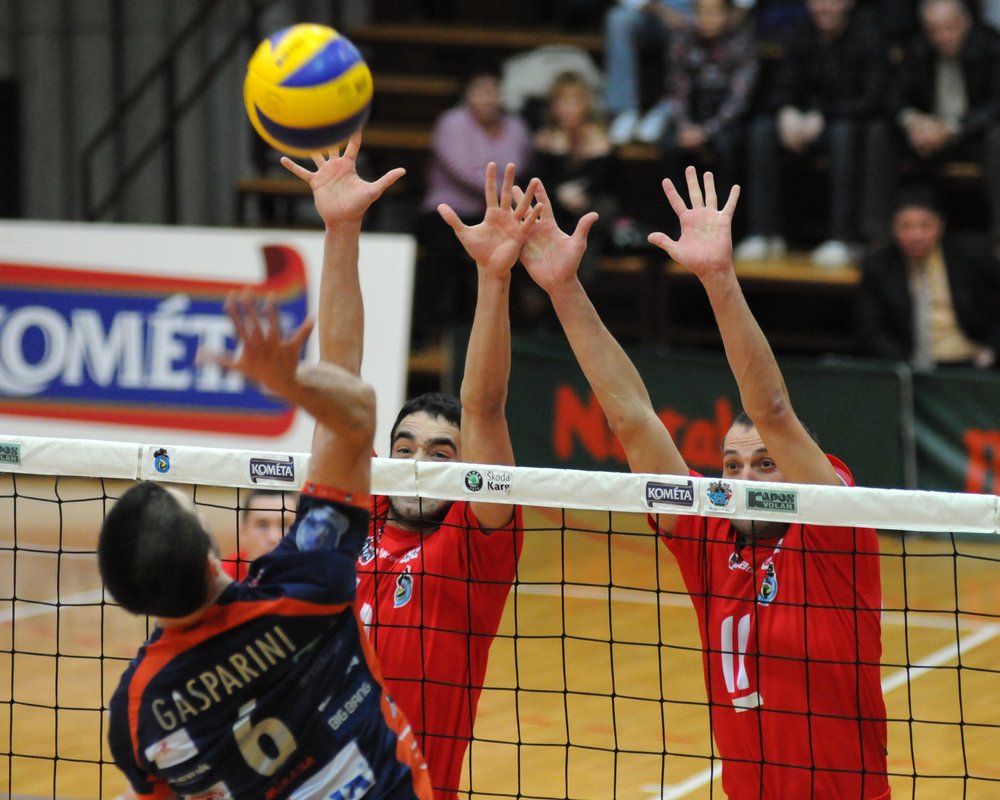 Taking a Good Approach and Armswing

Also remember to jump high every single time you approach. This will make the defense think you're going to swing hard every time.

Broad Jumping vs Jumping Straight Up

Which is better for hitting?

Taking a big approach, flying in and broad jumping to the ball...

Taking a big approach, getting underneath the ball, and jumping more straight up? 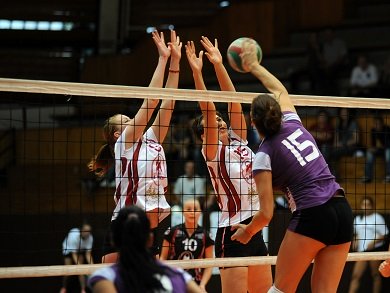 Hitting a Smart Shot Off the Blocker

Some advantages of the broad jump...

1. You can hit hard. All coaches would like to have their players hit harder. If you hit hard, it's harder for the defense to block and dig. Also, broad jumping into the ball can give you a lot of momentum and allow you to put more energy into the ball.

2. You can be hard to read. Players that broad jump tend to just focus on hitting the ball as hard as they can. They aren't so concerned about placing the ball. If you have a fast arm swing and you hit the ball flat, it's often harder to read and dig this type of attack.


Some disadvantages to the broad jump...

2. You have a smaller window. Players that broad jump tend to have a smaller window because it's hard for them to hit a tight set. Players that broad jump don't like tight sets because they'll end up landing in the net or on a blocker. And it's tough to hit around a blocker when the set is tight. Often their only option is to tip because they must reach so far out in front to get to the ball. Not being able to hit a tight set allows your opponent to make defensive plays more easily.

This also puts pressure on the setter because if the set is too tight, the hitter's in trouble.

3. Contact usually isn't as good. Players that broad jump usually focus more on just hitting the ball hard and not contacting the ball with control. The ball is usually contacted more flat without much topspin.

Some advantages to jumping more straight up...

2. You can hit a tight set. There are many situations in volleyball where a player needs to be able to make a play on the ball in the plane of the net. Hitting a 50/50 ball, tipping a tight set around the block, and jousting with a blocker, are all important opportunities for winning a rally. The players ability to win the game at the net is often the difference between  winning and losing. 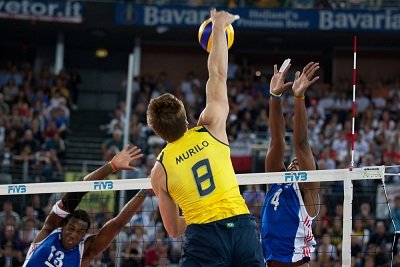 Getting Up High and Reaching High to Hit

When it's good to broad jump...

1. When hitting a back row attack.

2. When you need to block or joust.

The more options you display when you hit, the less predictable you become.

If you have only a couple hitting options, you are much more predictable and much easier for the defense to read.

Master the following hitting options and you'll become a much more deceptive attacker.

Swinging hard cross court. Probably the most common attack is a hard driven cross court hit. This hit is especially effective if the middle is slow to get to the outside to block.

This attack can also be effective if your opponent is playing perimeter defense because the setter will usually have to make the dig. If the setter makes the play, you've taken the setter out of the offense.

Tipping the ball to the middle. A tip to the middle of the court is usually effective against a team playing perimeter defense. Especially if you approach fast and jump high every time you approach, you will likely freeze the defense. Tipping to the middle isn't as effective against a man-up defense or red defense because there's a defender behind the block covering tips. So it's important to know what defense your opponent is playing before you decide where to tip the ball.

Tipping the deep corners. Tipping to the corners can be difficult to learn because it can often take a lot of strength to tip deep. Tipping deep can be a great weapon for outside hitters. It can become a guessing game whether or not a defender should stay at the baseline or rotate over to defend the tip/shot down the line. Also, if you have the ability to tip deep then tipping short becomes even more effective.

You don't want to just learn how to spike a volleyball. Jousting is also an important skill.

It's not strength but leverage that wins a joust. To win the battle, you want to keep your weight behind the ball. It's best to be under the ball, not on top.

The shorter player that gets behind the ball will usually beat out the bigger player that puts her strength and hands over the ball.

If you can get your opponent on top of the ball with you underneath, you will usually win.

The player that reaches more forward than up will usually have better leverage for winning the joust. You want to reach out, lock your arm and hold the ball against the opposing blocker.

As you come down, push through the opponent so the ball falls on their side of the net. 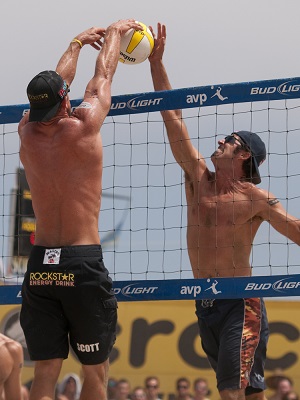 Winning a Joust on the Beach

In the above photo, it's going to be tough for the attacker to win the joust because he has to reach so far to push the ball through the block. Also, the blocker is making contact with the ball on the opponents side.

When blocking, your best chance of winning the battle will be if you penetrate and play the ball right out of the opponents hand. As a blocker, always try to make contact with the ball on the opponents side.

In the above situation, the attackers best option is to push through the block or swipe the ball off the hands. 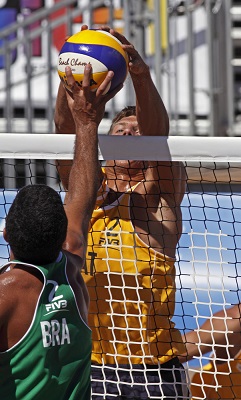 Holding the Joust to Win

In the above photo, you can see how it can be important to jump close to the net. For example, if you were to broad jump in this situation, you won't reach as high and won't hang in the air as long.

You'll also probably land in the net or on your opponent. So if you can see the ball is going to be set tight, be sure to take your last steps close to the net, jumping more straight up. 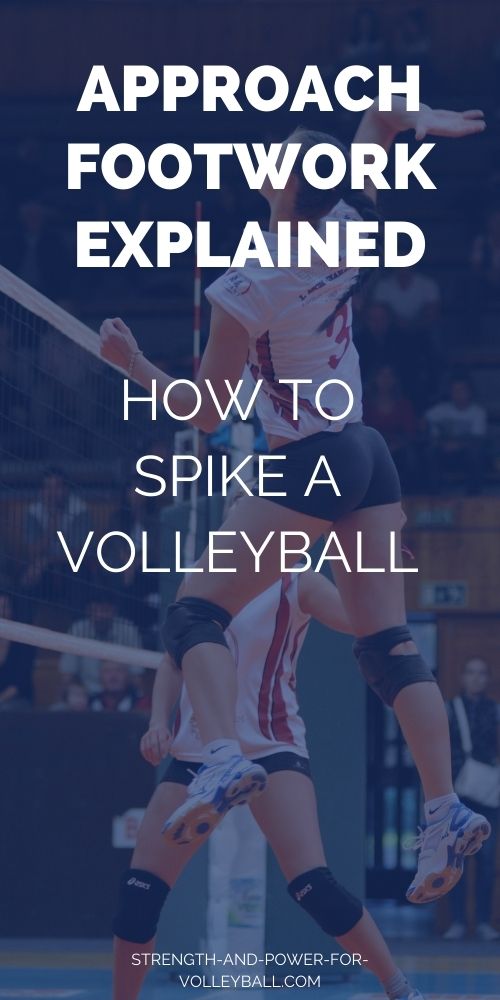