The the following are tips to learn beach volleyball. The game starts the same as indoor six person volleyball. One team is in serve receive ready to pass while the other team is serving and preparing to play defense.

Important Note: Just like indoor volleyball, in doubles the goal is to ATTACK. You want to put your team in a position that's best to attack your opponent. For example, what is the point of passing? You pass so your partner can set you a ball to attack. If you pass well, your partner will have an easier time setting you a good set. The better set you get, the easier it is to attack which results in being more likely to score points.

The goal of passing in serve receive is to pass effectively enough so your partner can set you a good set.

Hitting and Blocking on the Beach

With just you and your partner covering the whole court, how you line up in serve receive and how effectively you anticipate your opponents serve will greatly impact how well you pass.

When you first learn beach volleyball, it's usually best to just have one of you call the ball. For example, as the ball comes across the net, just have you or your partner call out "me" or "you".

A serve between partners often results in difficulty deciding who takes the ball.

It's usually best to have the player that is facing cross court from the server to call the ball and take the "middle ball". 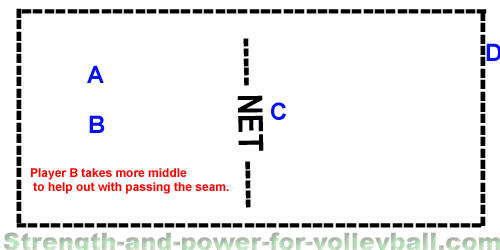 In the graphic, you can see that player B is standing cross court from the server. It's usually best for this player to take the middle ball because of the trajectory the ball is traveling.

Passing the "middle ball" is called passing "the seam". The player that is going to take the seam is usually the one that's best to call out who should take the ball.

You can see in the following graphic, since player A is cross court from the server, player A is taking the seam. 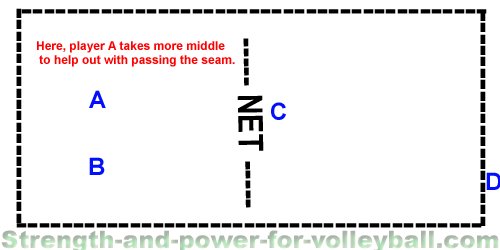 Where to pass the serve

When passing in doubles, you want to pass the ball to the middle or closer to your side of the court. The reason for this is to help your partner set closer to you. The closer the setter is to where the ball needs to be set, the easier it is to set accurately. 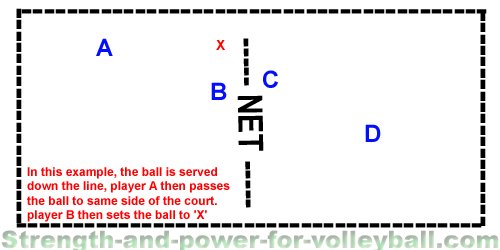 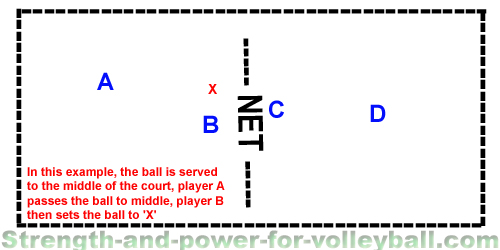 Where to line up after you pass

Where you line up after you pass depends on where on the court you pass the ball from, and also where you are passing the ball to.

This is a common mistake many players make when you first learn beach volleyball...

Many players don't know where to start their approach. They make the pass, but then forget to line up where they need to start the approach. Obviously, getting to the right spot to start your approach will make it much easier to get in position to spike the ball.

The basic strategy for playing defense involves one player at the net ready to block, while the partner stays back and is ready to dig a hard driven ball or run down a shot.

The best teams will usually have the taller player or best blocker block most of the time while the shorter, quicker, or better defender will stay back and play defense.

Making a Dig when you Learn Beach Volleyball

There are 3 basic strategies to blocking in doubles.

The first strategy is blocking "ball". This means the blocker is going to try and read the hitter and block the ball.

The second strategy is to block "angle". Angle means the blocker is going to take away the angle hit also called the cross court hit.

The third strategy is to block "line". Line means the blocker is going to take away the hard hit down the line.

The blocker may also elect to "drop" off the net and not block. Dropping is usually best for when the set is off the net and the hitter can't spike the ball very hard. Most blockers will drop straight back on the side they are blocking. For example, if the blocker is on the right side ready to block and decides to drop instead, the blocker will drop straight back to the same side of the court.

Another strategy is to drop to the side that you signaled. For example, if you signal angle, the blocker may elect to drop back into the angle to play defense. Yet another strategy is to drop to your strong side. For example, if the blocker would prefer to hit on the left side of the court, then every time the blocker decides to drop, they can drop to the left side so it's easier for them to hit on their strong side.

Obviously it's best to decide which blocking strategy you will use before the game starts. This is something important to go over with your teammate.

When blocking ball, the defender will often have to also read the hitter and/or read the blocker. Since the defender doesn't know where his partner is going to block, the defender needs to read or guess where to be on defense. Blocking ball can be an effective strategy for when playing against a hitter that "shoots" the ball a lot. As a defender, start your defense in the middle of the court and wait for the shot. If you start in the middle, it's easiest from here to cover the court.

The signal for blocking angle is two fingers.

The blocker here is signaling she is going to block angle on both players.

Signaling 2 with the left hand means she is going to block angle on the left side player.

Signaling 2 with the right hand means she is going to block angle on the right side player.

The best time to signal your partner what you are blocking is before the serve.

Sometimes during the rally the blocker will signal her partner.

Signaling to Block... Line and Angle

You can see the right hand is turned into the court. Always remember to turn your hands into the court because this is the direction you want to deflect the ball.

The best blockers have the ability to surround the ball with their hands.

Turning the Hands into the Court when Blocking

When blocking, it's very important to

1) Penetrate the net (get your hands on the other side of the net) and
2) Block the ball with your hands, not your arms. 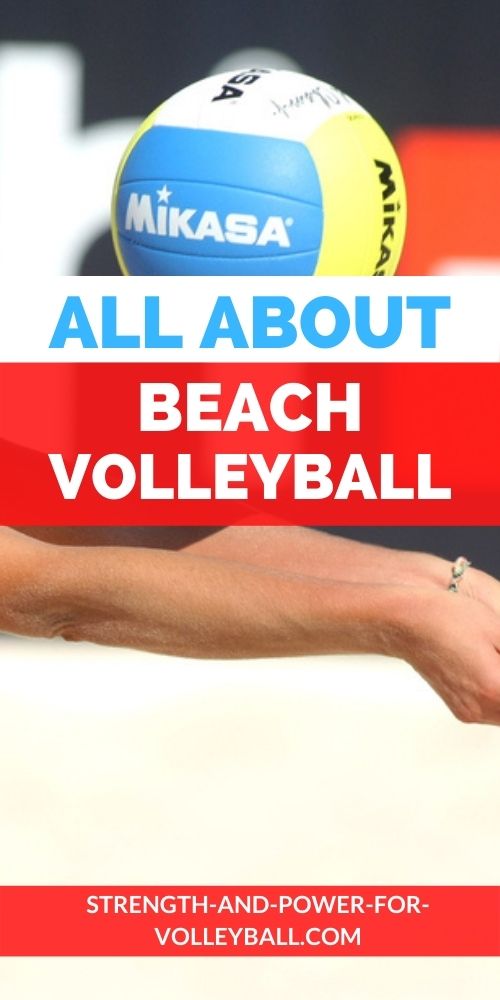 In this photo, you can see the blocker is signaling 1 with the right hand. This means the player is going to block the line hit of the player on the right.

She is signaling 2 with the left hand. This means she'll take away the angle hit of the player on the left.

Sometimes a blocker will also point to a side. This means they want a specific player to be served. 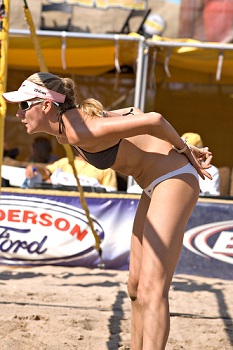 "Dropping off" to play defense

An often misunderstood skill in volleyball is dropping off the net. This is a very important skill that many players don't practice. The better a player is at dropping, the easier it is to play defense.

What's really important is the timing of the drop. For example, if you drop too early, the setter can see that you are dropping and can then set her partner closer to the net without worrying about a block. Generally, the closer the set is to the net, the easier it is to spike.

Also, as a blocker, if you are able to wait until the ball is set, and can see the ball isn't set tight, and are able to drop back and be ready to play defense, then you can be prepared to make a successful play on defense.

Dropping is a very important skill and shouldn't be overlooked. This skill involves the ability to read the play and anticipate what is happening.

Important Tip to Learn Beach Volleyball: Even if you are a smaller player and don't necessarily want to block, having dropping skills can be very important. For example, you don't want to cheat early off the net and leave an open net for your opponent to attack on. Even if you're a smaller player, be disciplined and stay up at the net ready for a tight set or an overset/pass. Once you can see that the ball isn't one that you want to attempt to block, drop back off the net and play defense.

For advanced players, dropping off the net is important to learn beach volleyball. Players that are highly skilled at dropping, especially taller blockers, will often frustrate a setter because the setter doesn't know whether to be concerned about how tight to set the ball. For example, if there's a chance there will be a big blocker at the net, the setter doesn't want to make the mistake of putting the set too tight for the hitter, resulting in being more difficult to hit around the block.

Again, the skill of dropping is very important in higher levels of volleyball.