Slime volleyball is a computer game that can be played on the Internet in a web browser.

The first player to six points wins! You can touch the ball as many times as you like, and you can win a point even if you don't serve.

You can play against a friend, or challenge the five computer opponents in one player mode and make it onto the high score table!

There are two players - if you are playing a one player game, then you are the player on the left. Win points by making the ball land on your opponent's side of the court.

How many levels are there? Five.

Can I change colors like in the other Slime games? Unfortunately, no.

Why is the first level harder than the second? IMHO it's not. Of course that's coming from the point of view that the first Slime's AI is simply a retarded version of the second one's. So it's a mystery why a lot of people think this is so.

Are there any cheat codes for this game? No. 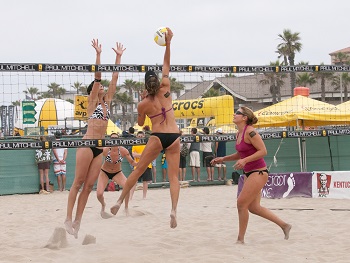 The tip serve is a serve where the server hits the ball high against the wall behind them. The opponent moves forward to the net where they anticipate the ball will land, the server also moves towards the net and lightly tips the ball over their opponent, which then lands in the back court. The wide variation in landing positions makes this a difficult serve to defend against.

The following are slime volleyball moves and strategies for playing against various slime.

If you use the tip serve, you can draw the slime closer to the net, which allows you to then tip the ball over the white slime. This serve is also useful against human opponents, except you vary it by occasionally "fake jumping" - jump the second time but don't tip the ball over the other slime (see Tip Serve above). Once the ball is in play, hit it deep into the court. If you are receiving the serve, just wait at the net, and jump and hit the ball as soon as it comes over the net.

As above. Watch out for drop shots or bastard serves: The Angry Red Slimonds loves to just push the ball over the net and let it drop. It will watch for you doing drop shots, so hit the ball as far as you can and the AI possibly won't get there in time. Don't bounce it off the back wall unless the slime is already back there. A really cheap way to win is by letting Slimonds serve, running to the net as he does a Bastard Serve (which 99% of the time he does), and jumping when the ball hits your slime. Usually the AI will follow the ball back and jump, so the ball goes underneath.

The lame way of winning is using the Skim Serve, or if you hit a deepish Tip Serve that hits the back wall just a bit above the ground. If you want a real challenge, once the ball is in play, you can win by throwing the ball at the net rather than spiking it, or hitting it deep into the back court and keeping it low (ie, don't jump when you hit it). Another way is to hit the ball very, very low while the black slime is near the net--try to hit the ball low into his front--it will bounce off his front and into the net, he will jump and it will hit beneath him.

If you are cheap, then try using the Reverse Skim Serve. Otherwise, like with the Slime Master, hit the ball deep and long. Wait for Psycho Slime to make a mistake rather than trying to hit winners. Don't spike or throw the ball at the net as this tends to bounce back off Psycho Slime over your own slime and you will lose the point.

The Big Blue Boss is one of the toughest slimes in Slime Volleyball. Be very patient, hit the ball long and low. I don't know of any serve that will always defeat the boss. There are reports that a certain type of tip serve will also defeat him (if you get it to hit the back wall just above the ground) but I can't do it! Otherwise, try a reverse skim serve, wait for the boss to hit it back low, and then move forward to hit the ball low so it skims over the net and under the boss. Playing to win using set plays is cheap though.

Secrets to beating the Big Blue Boss... There are 3 different ways to get points against this tough guy. The first way is to draw him close to the net and hit the ball over his head. The second way is to hit the ball very, very low over the net and he will often jump over it. The third way is a perfect slime volleyball slam.

Computer Keys to Play the Game

The following are the computer keys to hit on your PC to play Slime Volleyball.

If "oh shoot" doesn't work, you might need to turn popups on in your browser.

This is Slime Volleyball scoring in one player mode only.

If the slime volleyball game is too slow, press B to turn double buffering off, or play One Slime Classic instead.