Volleyball Athletes
Do you know what kind of athletes make the best volleyball players?

Volleyball athletes and key character traits for winning at volleyball.

All great teams have leadership. The coach is the leader of the team and you also need a leader on the court.

The setter is usually the team leader.

The rest of the players on the team should also possess leadership qualities.

Leadership can be defined as "one's ability to get others to willingly follow".

The following are some important character traits... 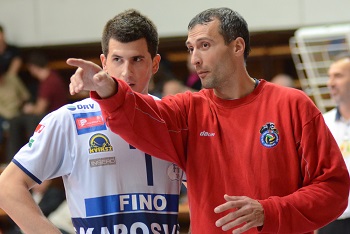 Something real critical when it comes to being successful is, "possessing the ability to learn".

Don't take the ability to learn for granted. Learning is a skill, maybe the most important skill in volleyball.

Your current skill level is temporary. Learning is a skill and your ability to learn can be improved.

If you're an athlete that makes good grades in school, I would bet you're pretty good at learning.

You want athletes on your team that can figure out what they need to do to get better. Good students usually possess this quality.

The right mindset can make all the difference.

The following are some characteristics of athletes with a winning attitude...

"Seeing volleyball as play and not work"

Many coaches and players don't understand why "burnout" occurs. Burnout is the result of training without passion.

The following are traits of athletes that have the wrong attitude...

The following are traits of athletes with the right attitude...

Tall Athletes for Attacking and Blocking
It's an advantage to be tall for spiking and blocking at the net.

A tall athlete has more room for error when spiking. The trajectory of the ball is hit at a much sharper angle which allows for less attacking errors.

It's also easier to block if you're taller. Taller blockers can get their hands in position faster and cover more space.

Tall Athletes for Passing and Defense
Not just on play at the net, being tall is also an advantage for playing defense. Tall players have a longer reach and can cover more court. A disadvantage to being shorter, for example, it can be harder for shorter players to pass deep serves.

Taller players are also generally stronger. This is an advantage for overhead passing and setting. For example, it's easier for taller players to pass the ball using an overhead setting motion because their hands are bigger and stronger, which makes it easier to control the ball.