The volleyball quick attack for running a fast offense.

You may be thinking, why not just set a high set?

Why do you need to set a quick set?

The quick set is to run a faster offense. You have an advantage to go faster against slower teams. The teams that are bigger and slower have a difficult time defending the quick attack.

If you are a quicker team, one strategy is to beat the slower team with quickness and deception.

There are 3 reasons to run a quick attack.

1) Beat the blockers. Be in the air ready to hit as the ball is set. This forces the blocker to decide to stay with you to try and block you.

3) Create separation. The quick move to the middle will space out the attackers. This will make it difficult for the blocker to get out away from the middle to block.

4) Positioning. A quick helps the middle get into a better position to get a kill. Run the middle to side of the court where it’s a good match up. For example, draw the middle blocker to the middle to help out the outside attacker.

X Play. Running an X is when the middle is running a 1, while the right side attacker is coming for a 2.

Shoot Set. This is a set place half way between the outside and the middle. When run quickly, the outside attacker has a chance of hitting the ball quickly to not get blocked.

1 Set. This is a set to the middle hitter. The hitter comes to the setter. The setter sets the ball a very short distance. The hitter is usually in the air before the setter releases the ball.

32 Set. A 32 is a quick set to the middle. This ball is set quickly and is placed about a meter from the setter at about the height of a 2 set.

31 Set. A 31 set is a set quick to the middle. This ball is placed about a meter from the setter and is very low (about the height of the 1 set).

How to Spike the Volleyball Quick Attack

First thing to talk about is Timing.

As a middle hitter approaching to spike a quick attack, you want to be up in the air early before the ball is set. Getting up early will give the setter a target to set to. Also, this puts added pressure on the middle blocker to get in position to block the quick attack. This will make it more difficult for the middle blocker to close in on a set to the outside or weakside.

Spacing and Positioning. When you are spiking a quick set, you want to be positioned in the air about arms-length from the net. You also want some distance from the net so it’s easier to hit around the block. Arms-length away from the setter is also a good idea so your setter can see you. More space from the setter will make it easier for you to hit. You’ll also have a bigger window for the setter to place the ball.

For a shoot set or 3 set, you should approach at an angle to allow yourself the option to hit the ball to the left or to the right. If you approach perpendicular to the net, this will limit the areas of the court you could spike the ball.

If you enjoyed these tips on the volleyball quick attack and would like to keep it close to you at any time, just save this pin to your Pinterest Volleyball Training Board. 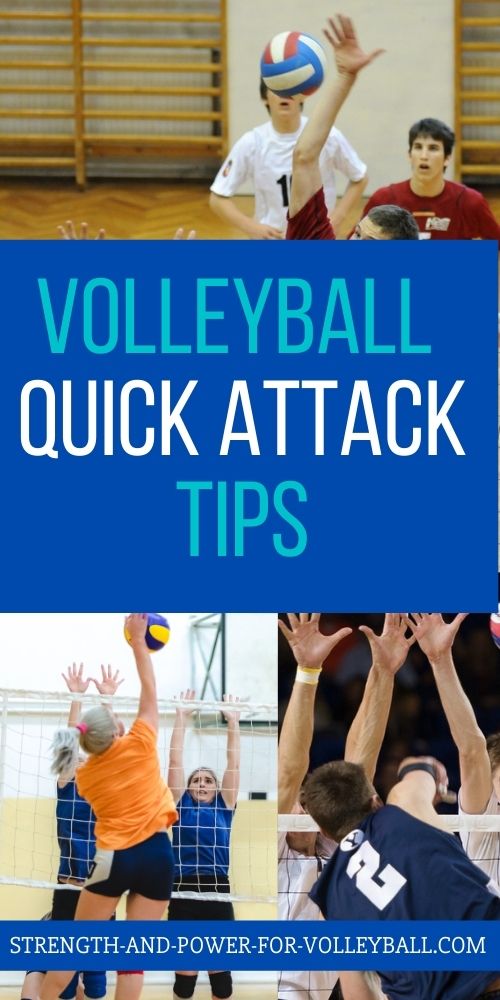