Volleyball vocabulary for communicating on the volleyball court. Be prepared to understand your volleyball coach by learning the terms of volleyball.

Kill: An attack hit resulting in a point or sideout.

Hitting Line: A straight attack down the sideline.

Line Shot: Same as hitting line. A ball spiked by an attacker from near the sideline, the ball goes down the sideline to deep corner.

Off-Speed Shots: Attacking the ball so it goes slower and is placed to a spot. Deceptive hit like a change-up pitch in baseball.

One-footed slide: Approach and attack the ball off one-foot. Usually done by the middle hitter. Movement is usually along the net.

Outside Hitter: Left side attacker. Often the go-to attacker on the team.

Volleyball Vocabulary for Defense and Blocking

Middle Up: A defensive system that focuses on covering tips of balls sent short over the block.

Off-blocker: The blocker that drops off the net during the attack.

Outside-in: Playing defense moving from the sideline to inside the court.

Pancake: one-hand floor defensive technique where the arm and body is extended. This technique is for saving a ball from contacting the floor.

Penetration: The blocker’s ability to reach over the net. Penetration helps take away more crossing space to prevent the ball from crossing the net.

Perimeter: Backcourt defense where team players are positioned near the boundaries of the court.

Volleyball Vocabulary for the Court

Lines: The marks that serve as boundaries of a court.  2 inches (5cm) wide. Ball lands on the line, the ball is “in”.

Left Stack: Blocking scheme where the left side player starts behind the middle player in order to stay on the crossing attacker.

Load: To position the blockers so that the most effective blocker stays with the go-to attacker.

Off-Speed Hit: Hitting the ball so that it slows quickly to land faster into the court.

One-Set: A vertical set delivered from 1 to 2 feet above the net. Usually set for the middle hitter.

On-Hand Side: When attacking, the hand of the hitter is alongside the setter.  Also called “strong side”.

Off-Hand Side: From the setter, the ball crosses the body of the spiker before attacked.

Opposite: The player positioned opposite the setter. This player is positioned on the right side at the net.

Pipe Set: A back row attack from the middle.

Multiple-attack: Offense consisting of two or more players approaching to attack at the net.

Power Tip: A strong open-hand tip that crosses the court hit traveling away from the spiker.

Pump: Play in which an attacker fakes spiking a quick set.

Volleyball Vocabulary for the Rules

Overlap: A violation in line up when a team is whistled for out of rotation when the ball is served.

Overhand Serve: Tossing the ball and serving to strike the ball above the shoulder.

Overhand Spin Serve: The server wraps the hand over the top of the ball. The result is topspin. The serve is easy for the server to control and keep in play. Can be difficult to receive because the ball quickly drops. The ball tends to get there faster making it difficult to pass.

Middle: This is the player either the middle-front or middle-back player.

Middle Blocker: Usually plays in the middle of the net when in the front row and moves laterally help out with blocking the outside attackers.

Overhand Pass: A pass with both hands help up high, open, and controlled by the fingers. A ball-handling skill using both hands simultaneously to contact the ball above the head and direct it to the intended target.

Pass: Receiving a serve or the first contact of the ball with the intent to control the ball to another player (pass to the setter).

Overpass: A ball passed unintentionally over the top of the net. 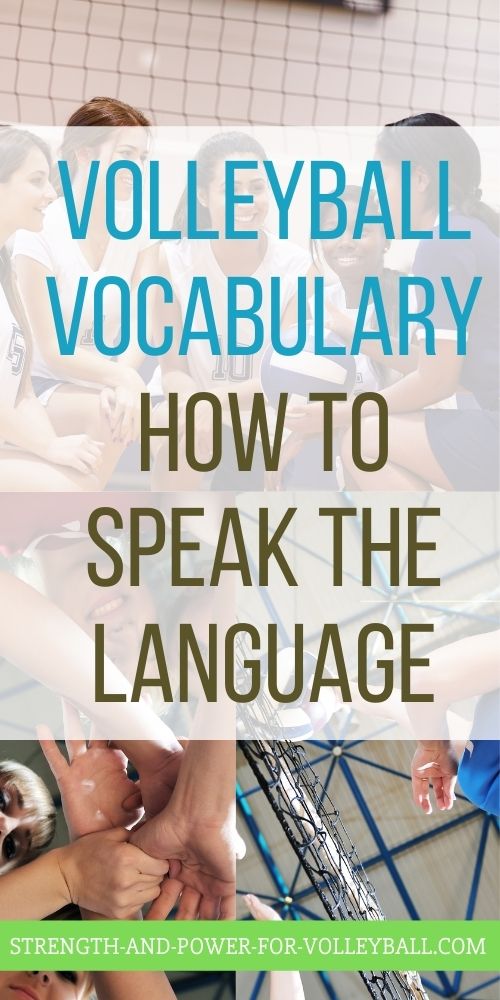