Beach volleyball hand signals are important for effectively communicating with your partner and playing defense.

Before the serve is usually the best time to signal your partner what you're going to block.

Signaling 1
Signaling one finger with your left hand means you're going to block line on the right side hitter.

Signaling one finger with your right hand means you're going to block line on the left side hitter.

Signaling a fist
A fist means you aren't planning to block. For example, as the attacker is being set, the blocker pulls off the net to help out with defense. 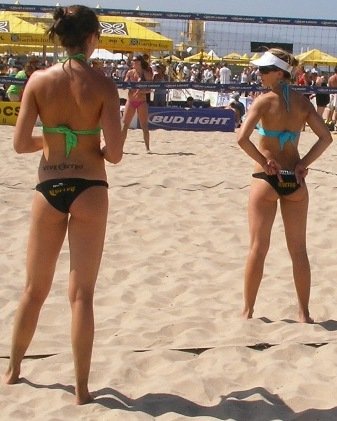 Defender Signaling the Blocker How to Block

Signaling with the thumb
The thumbs are used to show your partner which player you'd like them to serve to.

Basic strategies for blocking angle
When blocking angle, line up on the hitting shoulder of the attacker. At the last second, jump and reach with both hands penetrating the net into the angle.

With this technique, what you're trying to do is show that the angle is open and then at the last second penetrate into the angle as much as you can. 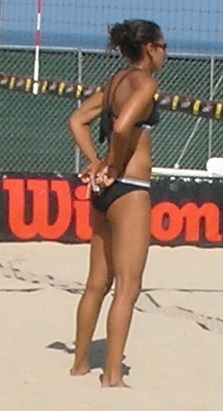 Signaling Your Teammate in Beach Volleyball

Basic strategies for blocking line
The technique for blocking line is the same as blocking angle except this time jump at the last second reaching to intercept the ball that could be hit down the line.

When first learning techniques for beach volleyball hand signals, youre simply showing an open shot then at the last second taking it away.

In the beginning, you'll be doing a lot of guessing. After awhile, you'll get better at being deceptive and reading the hitter and you won't have to guess quite as much.

Especially if your partner is a really good defender, it's usually best to block safely, taking away some area of the court while your partner covers the rest.

As a Blocker, Always Take Away Something

If you are blocking line, you must take the line away.

If you're not great at blocking balls, you must still take away area so your partner has a chance to make a defensive play.

If you're a small block, don't underestimate the importance of directing the ball to your partner. If your block creates an opportunity for your partner to make a defensive play on the ball, then you've done your job.

When playing indoor 6's, you go up high with a teammate and sometimes two other teammates to form a wall.

In sand volleyball, blocking is entirely different. You're blocking all by yourself. To be successful blocking you need to be deceptive.

Hiding the block
In doubles, you wait until the hitter is committed to a particular angle then go after it. If you show your block too early, you become an easy blocker to hit around.

Bait the attacker
Show line first, then at the moment of contact reach into the angle.

To block line, do just the opposite. Show you're going to block angle then sweep quickly into the line.

You must block the tight sets
If the set is close or on top of the net, you should get at least a hand on it. It's important that your opponent respects you as a blocker. A set tight to the net is an unforced error that must be taken advantage of.