Beach Volleyball Spike
Techniques for Spiking on the Beach

Spiking in the sand isn't an easy task. With indoor volleyball, it's easy to talk about the 4 step or 3 step volleyball spike approach.

However, when approaching to hit on the beach, your approach requires different amounts of steps to get in position to jump and hit.

Tips for Spiking
As soon as you pass, start toward the net using as few steps as possible. You want to take long strides, not short choppy steps.

Your last stride (big right followed by a small left) in your approach should be a long powerful one. In the sand, you must jump straight up. This is different than indoor.

When playing indoor, you can broad jump or drift toward the net when you jump to hit. In the sand, you'll likely get stuck and not get out of it very well if you don't jump straight up. 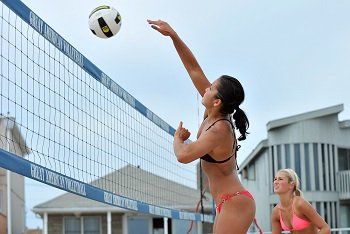 Spiking at the Net

The three basic elements of the beach volleyball spike are the approach, the jump, and the contact.

Approach jump on the beach
The purpose of the approach is to turn your horizontal speed into vertical power.

The approach on the beach is different than indoor because your approach may require you to take many steps. For example, when playing indoor, you likely will concentrate on perfecting a 3 or 4 step approach. On the beach, you take as many steps as necessary to get to the place where you need to jump and hit.

If you pass the ball from the endline, you have 30 feet to travel to hit the ball. On the other hand, a short serve may require you to take just 2 steps. So the last thing you should be concerned about when approaching on the beach is counting your steps.

Hitting Around the Blocker

Approach quickly and explosively
After you pass the ball, quickly start moving towards the net. Move quickly taking as few steps as possible. When you're about 4 or 5 feet from your take-off point, take one final powerful stride.

The beach volleyball spike for right-handed hitters that hit on the left side of the court, start your approach facing the direction that gives you the best angle for your spike. By facing the angle (cross court), you can hit the hard angle straight on and still have the option of turning your torso hard to the left to hit the ball down the line.

The beach volleyball spike for a right-handed player playing the right side is a little different. Approach the net facing down the line so you can hit hard straight away and also give yourself the option to turn your torso to the left to hit the ball angle.

If you're left-handed, reverse these techniques.

Explode Up as Fast as Possible

Plant both feet before you jump
After the last stride, your trailing leg comes forward to close the approach as you plant both feet together to jump. You should be swinging your arms back as you plant. Then bring arms forward in a pendulum motion as you lift off the ground.

Don't broad jump
Since you're jumping in soft sand, you shouldn't be broad jumping. It's important you jump straight up out of the sand. Jump straight up behind the ball while keeping it slightly in front of your body. Contact should be made about 6 inches in front of your body. You want to jump more straight up if you're playing in deep sand. Deep sand can make it difficult for you to get up high, so jumping more up than forward will help you get higher in the air for spiking.

Arm swing
Draw your hitting arm behind your head before you take a swing at the ball. Be sure to extend your arm upward to contact the ball as high as you can. 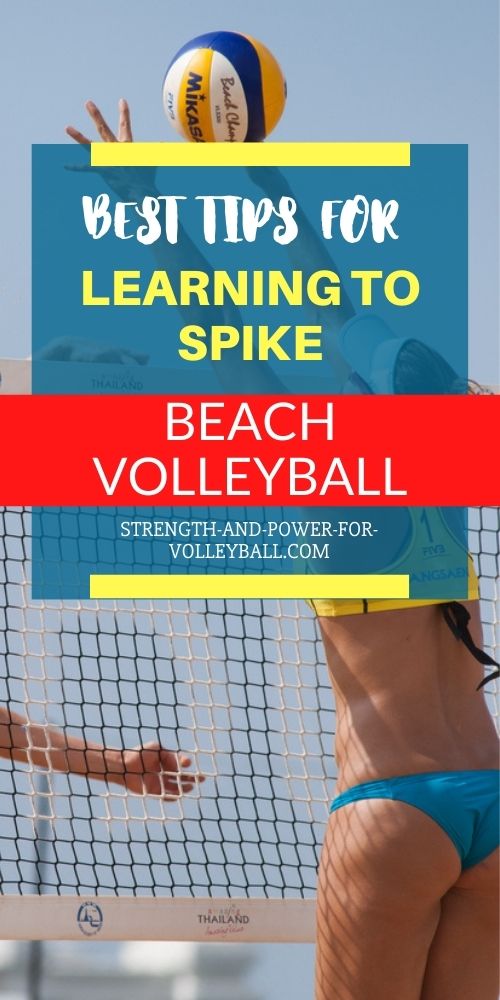 Get Up High and Outreach the Block

Develop an array of shots
To be successful in doubles, you need to develop an array of beach volleyball spike techniques called "shots". The key to having an effective soft shot is to disguise it until the very last moment. Volleyball approaches in the sand that are explosive, with the hitter contacting the ball at max height every time, aren't as easy for the opponent to read.

When preparing for a beach volleyball spike, you should look like you're going to hit the ball hard every time. By approaching hard every time, you'll always have the option to swing hard or shoot the ball, hitting a tough shot at the last second.