How to Play Beach Volleyball

How to play beach volleyball isn't that much different from the indoor game. Most of the rules and strategy for playing on the beach are the same.

You could probably say the biggest rule differences between indoor and the beach is setting and open hand tipping. Beach volleyball rules prohibit player's from taking the ball with an open hand to attack. Basically, it's illegal to open hand dink or tip the ball using "finger action". So, if you're going to hit an off-speed shot, don't use your fingers to direct the ball.

Setting rules on the beach
Rules for setting are much more strict on the beach. When setting, the player must release the ball with very little spin, or incur a violation. 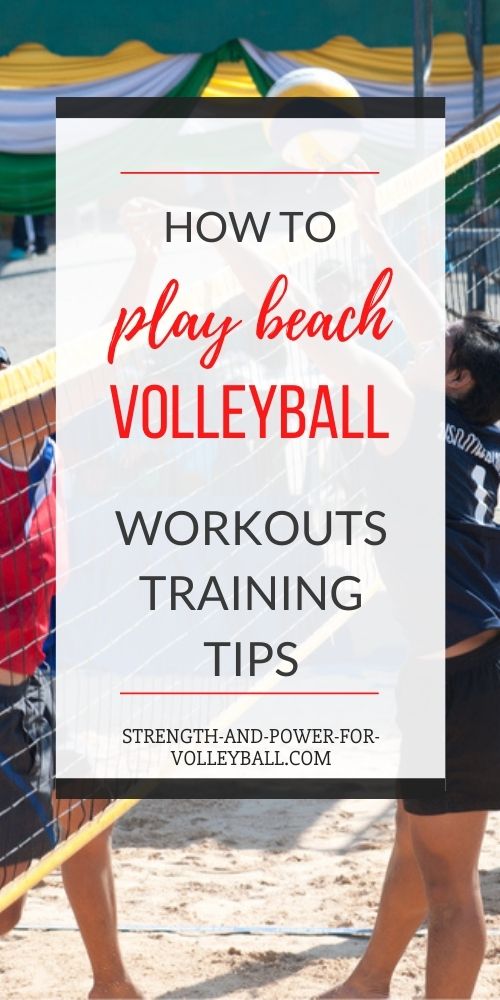 Players crossing under the net
On the beach, player's can pass underneath the net as long as they don't interfere with the opponent's play. In most indoor volleyball organizations (USAV and high school), it's illegal to cross the centerline. In grass or beach doubles there isn't a centerline and play must be judge on whether or not the player causes interference.

The ball
The outdoor ball is usually less inflated, a little larger, and heavier than indoor volleyballs. All these characteristics make it easier to handle the ball in the unfriendly elements of caused by sun, rain, and especially strong wind.

It's important to know the rules in order to understand how to play beach volleyball.

Serving on the Beach

You could probably say it's even more important to serve well on the beach than it is when playing indoor. Only having you and your partner to pass the serve, it can be very difficult to pass really tough serves.

The skills for how to serve are basically the same as they are for serving indoor. Serving with spin can be more important because of the wind.

For example, spin can help you control the flight of the ball making it more predictable where the ball will travel. Player's that have less experience passing in the wind will likely have trouble passing balls that spin. 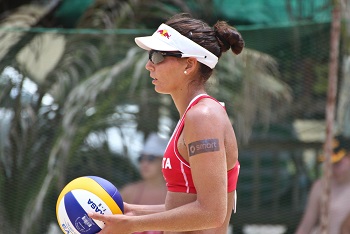 Passing on the Beach

When learning how to play beach volleyball, your passing skills are different than indoor. In doubles, you only have one teammate helping you pass, which means you have a lot of court to cover. On top of that, if you're playing in the sand, it can be very difficult to move around and get in comfortable position to pass.

You may also find yourself in awkward positions to make plays. For example, you won't always be in good position to pass and you must use unconventional techniques than you likely never use when playing indoor.

Setting on the Beach

The technique for setting is the toughest skill to master when it comes to learning how to play beach volleyball. The skills for setting on the beach are much different than indoor setting. Not only do you have to deal with playing on an uneven surface, but also your setting technique is different. Beach player's must set the ball with very little spin or a violation will be called. Hands are called much tighter on the beach than indoor. This can be very tough because if you don't have good hands, you could be called a lot which costs your team points. The tight setting rules have forced many players to learn bump setting techniques.

Learning how to play beach volleyball and spiking in the sand can be very frustrating for player's that are transitioning from indoor. When playing on a hard court, it's much easier to approach and hit. In the sand, your feet sink and if you are new to playing on the beach, you'll likely get frustrated because it's harder to approach.

If you don't have a good approach, it's going to be tough learning how to play beach volleyball. When approaching, you must take faster steps. Also, your ground contact time when planting to jump is much longer than it is when jumping on an indoor hard court. Spiking in the sand also requires a greater amount of strength.

Core muscles are used a great deal when you play sand volleyball. The best beach player's jump high and hit hard because they have a strong core. They have essentially trained their entire body to work together as a single unit.

Blocking on the Beach

Blocking is different on the beach in that all blocks are solo. Solo means you are blocking by yourself. Blocking techniques are different when you're a solo blocker. For example, a blocker that blocks angle (or cross court) might reach into the angle to block the ball. This can be different than blocking indoor.

Indoor blockers are usually just taking away area. On the beach, more often blockers will go for the stuff block or bait a hitter to hit to a certain area of the court their partner will be covering.

Digging on the Beach

Learning how to play beach volleyball and make defensive plays on the beach can be very intimidating at first because you have so much court to cover. Reading and anticipating are skills great defenders must develop. This is much different than playing indoor. Many indoor players are taught to get in position before their opponent attacks the ball. With six players on the court, it's much easier to get away with not anticipating the play and getting in position to play the ball without knowing ahead of time (anticipating or reading) where the ball is going to go.