Keeping score in volleyball for a deciding set and important tips for scorekeepers.

The purpose of the design of the deciding set scoresheet is to keep the teams on the same side of the scoresheet.

After the coin toss, the referee will inform you which bench each team will occupy and which team will be serving first.

Enter line ups on both sides at the start of the match. 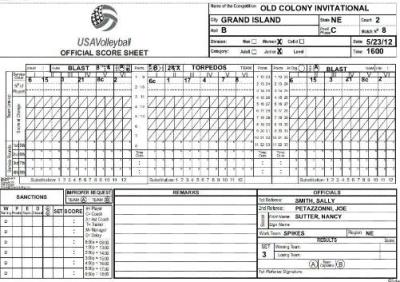 For the first 8 points of the deciding set, the time-outs and substitutions will be recorded on both the left and right sides of the scoresheet. 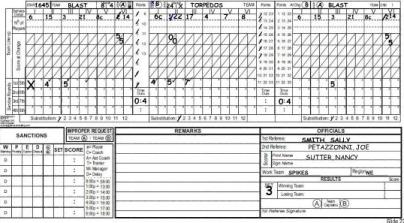 After slashing the 8 on the left side scoring column, write an 8 in the "points at change" circle.

You don't enter an exit score for player 21 on the left side because she will continue to serve after the court switch occurs.

Next, transfer the last exit score from the far left side to the far right side.

In this example, transfer 5 to the exit score for #3. Remember, you don't check the box. Only enter the 5.

Remember to give the ready signal to the referees to indicate you are ready after the court switch.

From this point forward you can ignore the left side of the scoresheet.

End of the Match

Enter the winning team name and their score.

Enter the losing team and their score.

Check over the scoresheet to ensure everything is correct and complete.

Have the first referee get the coaches' signatures. 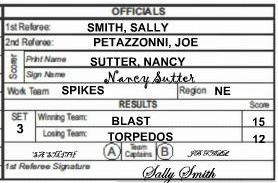 Tips for Keeping Score in Volleyball