Volleyball formations 5-1 for running an offensive system for a team that has just one setter. On this page you'll learn how to line up on the court when running a 5-1 offense. Also, you'll learn the advantages and disadvantages of running the 5-1 volleyball system.

A 5-1 offense is when a team has 1 setter that sets in every rotation. So, there is 1 setter and 5 attackers. A 6-2 offense has 2 setters and 6 attackers.

The advantage here is that now the setter has the option to attack at the net.

The disadvantage is the setter has only two attackers at the net to set.

Advantages of the 5-1 Offense

Stacking is when players are grouped together to one side of the court in order to get an advantage. For example, you may decide to stack players to the left side of the court so the outside hitter is in better position to approach to hit.

S is the setter.

L is the libero.

R is the player opposite the setter. This is also referred to as the Opposite or the Right Side Hitter.

H1 is the outside hitter closest to the setter.

H2 is the second outside hitter.

The libero is the player that comes in the match to replace a back row player. The libero usually replaces the Middle Blocker in the back row.

In rotation 1, the setter is RB. The libero is MB. The H2 (second outside attacker) is LB.
In this rotation, the team has 3 primary passers. The H2, the Libero, and H1. 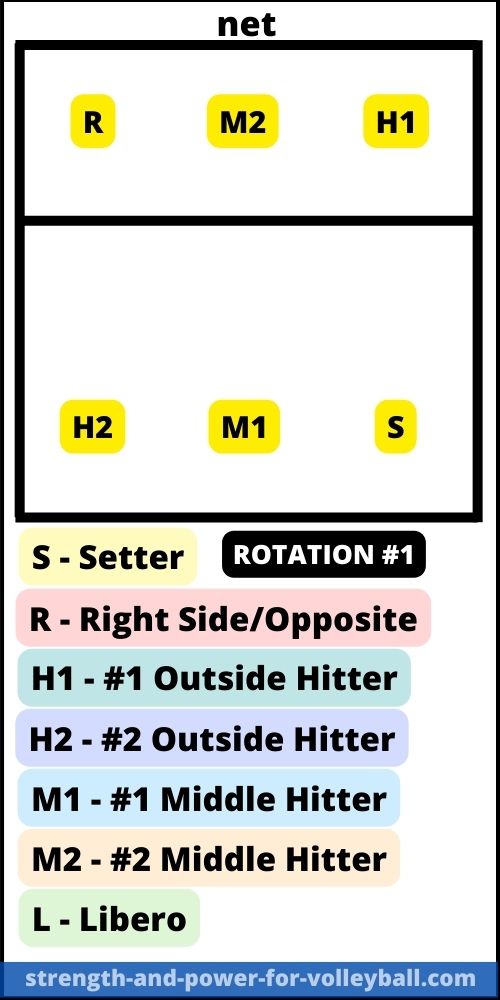 The H2 needs to be careful not to overlap the player in LF (R). 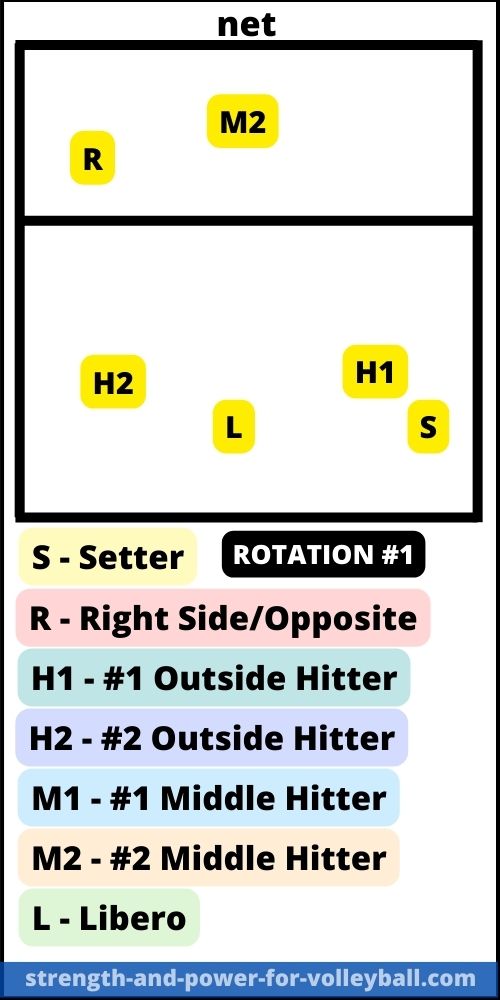 In rotation 2, the setter is MB. The libero is LB. The H1 is RB. You can see the players have shifted positions, but are still in legal rotation.

The setter is pushing the Opposite to the net. The setter and opposite are lined up this way because for the rotation to be legal, the opposite must be closer to the centerline than the setter.

The H1, Libero, and H2 are lined up ready to pass.

This rotation has one of the most common overlaps that gets called. The setter and libero (LB).

The libero will move over and try to cover more court to receive the serve. In this situation, the setter should watch the libero and make sure there isn’t an illegal overlap.

Ideally, you want the libero to get in the best position they can to receive the serve. So, it’s usually best for the setter to get in position to make it easier for the libero.

Also, the H2 is LF and needs to be closer to the net than the libero. So, when the H2 backs up to pass, there is potential here for an overlap. 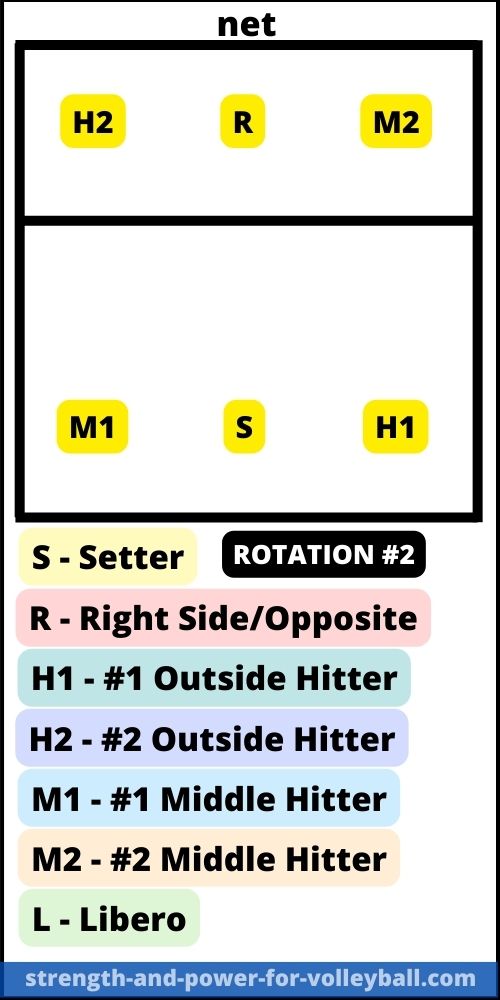 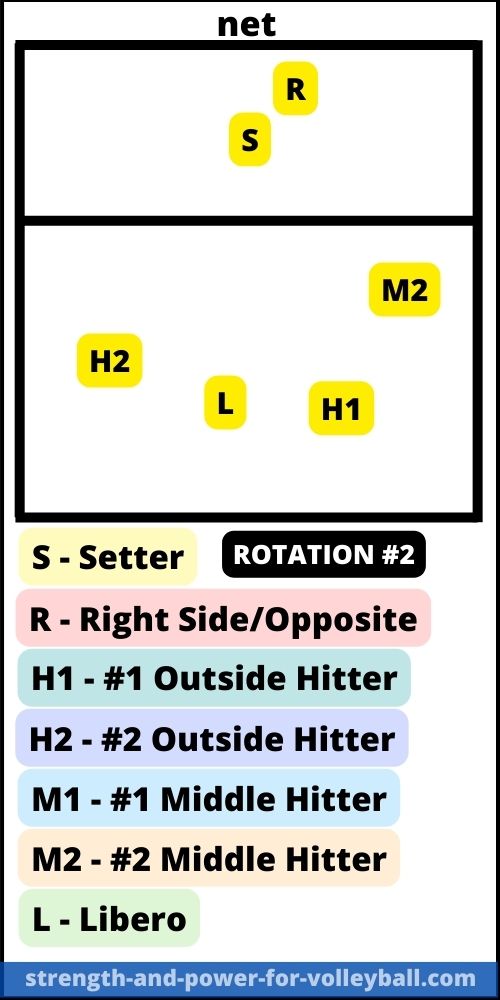 One of the best strategies is to always have the Outside Hitters and Libero passing in serve receive.

Here, the libero has replaced M2 in the back row. The setter is LB. The two outside hitters are lined up to pass in serve receive.

With the H2 at MF and H1 at MB, there is potential for overlap. Also, the H2 needs to be careful not to overlap the M1. 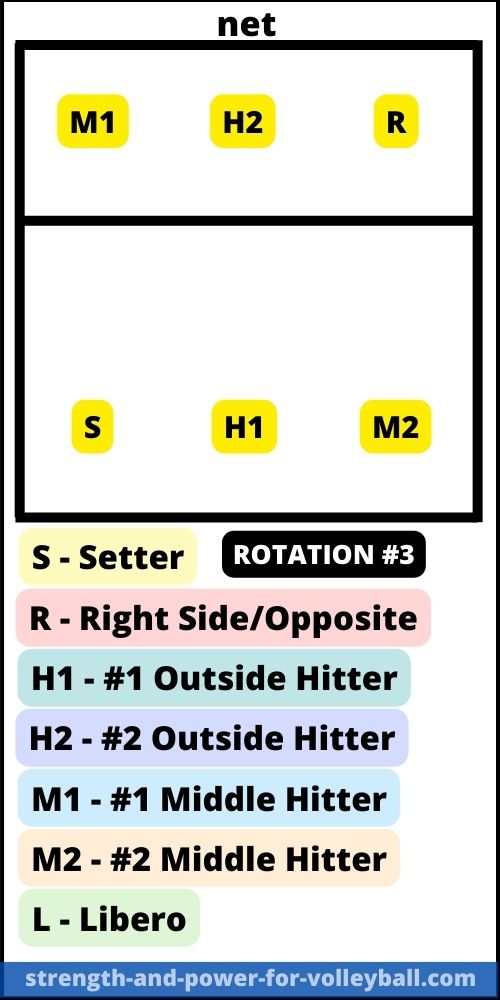 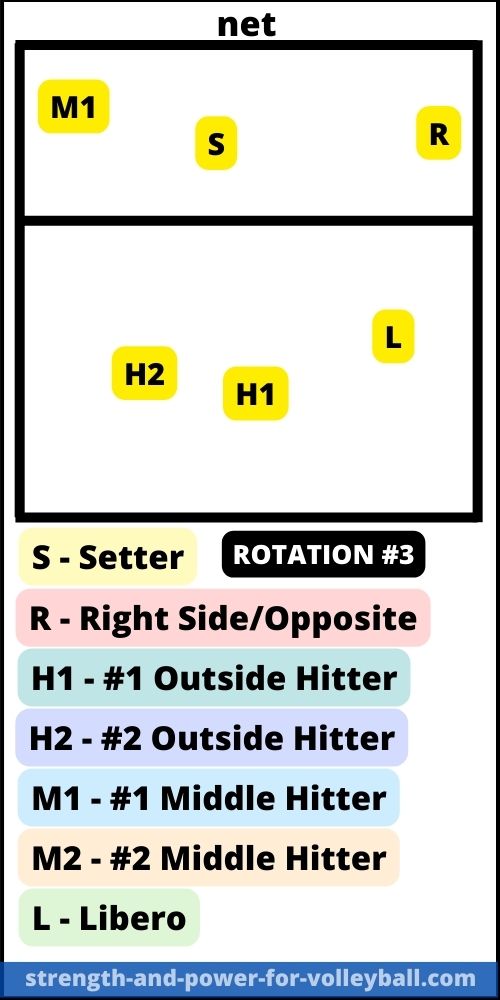 Setter is now LF. H2 is coming over the left side of the court to pass and attack at the outside. The H2 needs to be careful not to overlap M1. 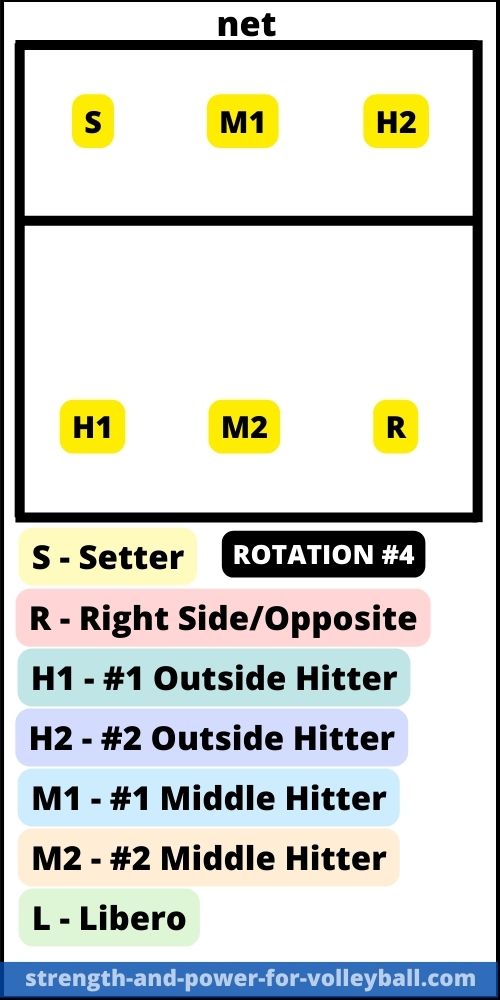 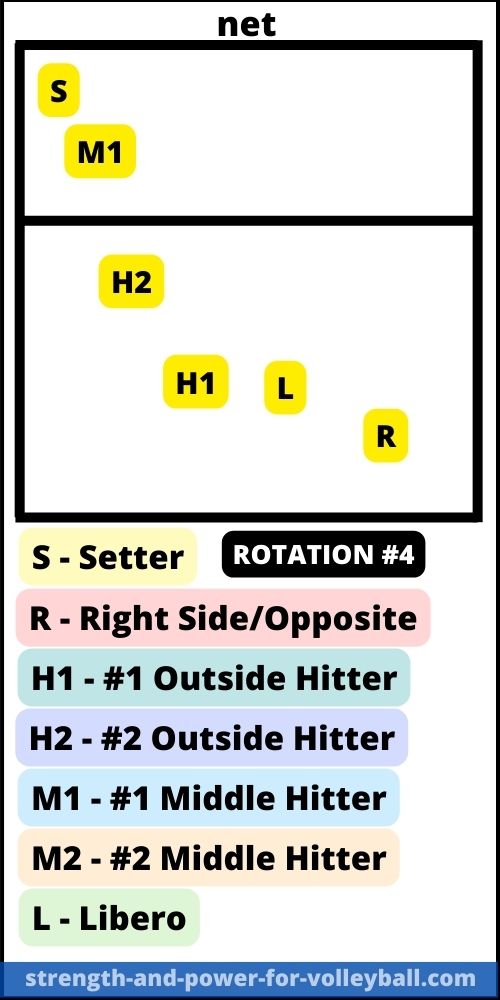 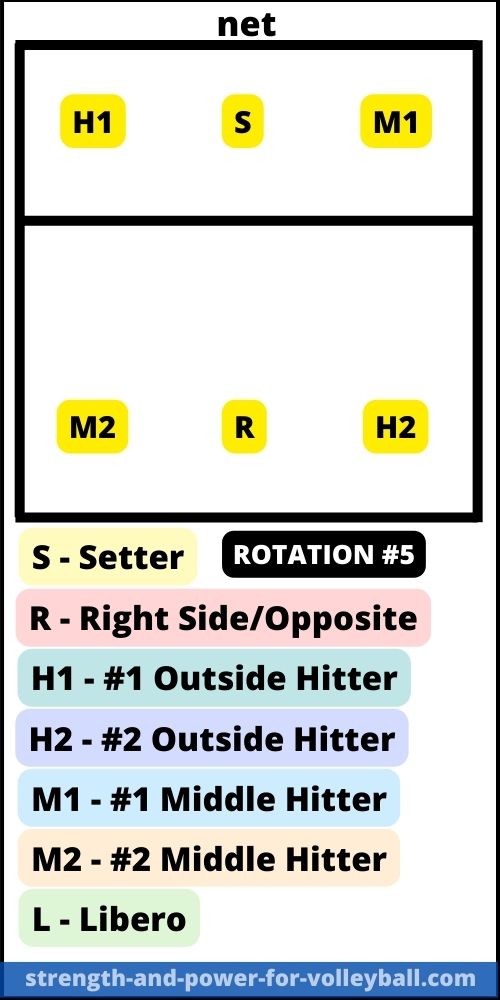 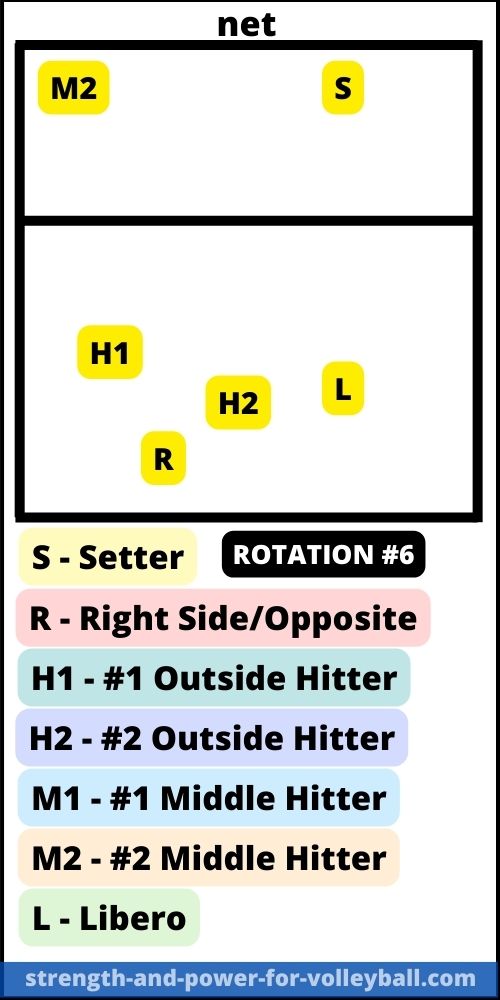 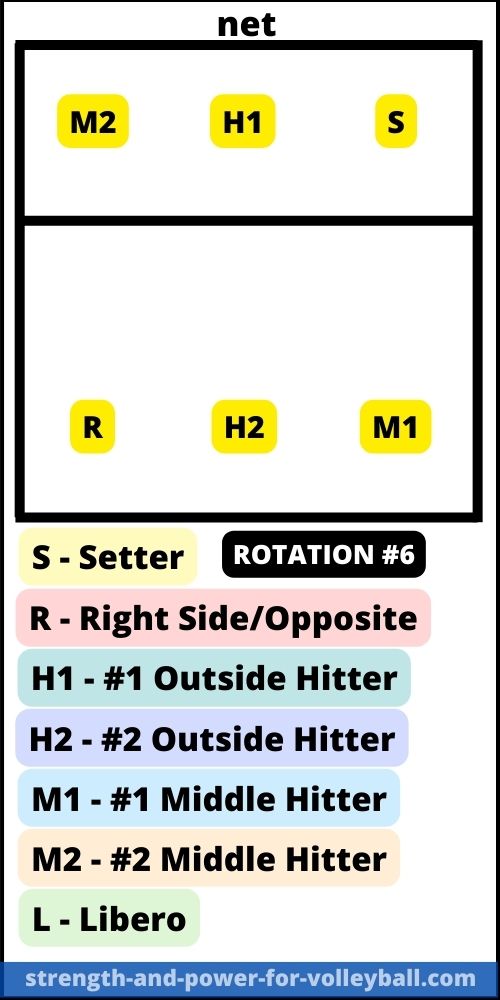 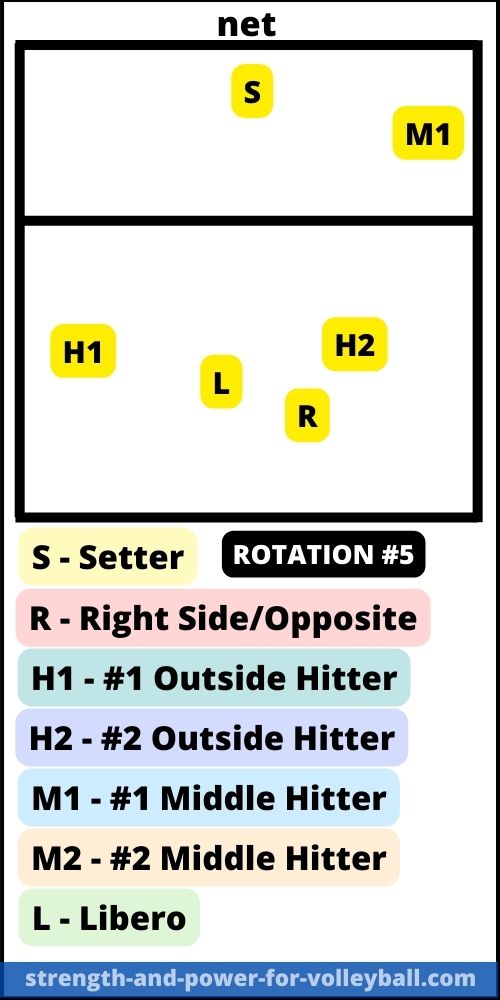 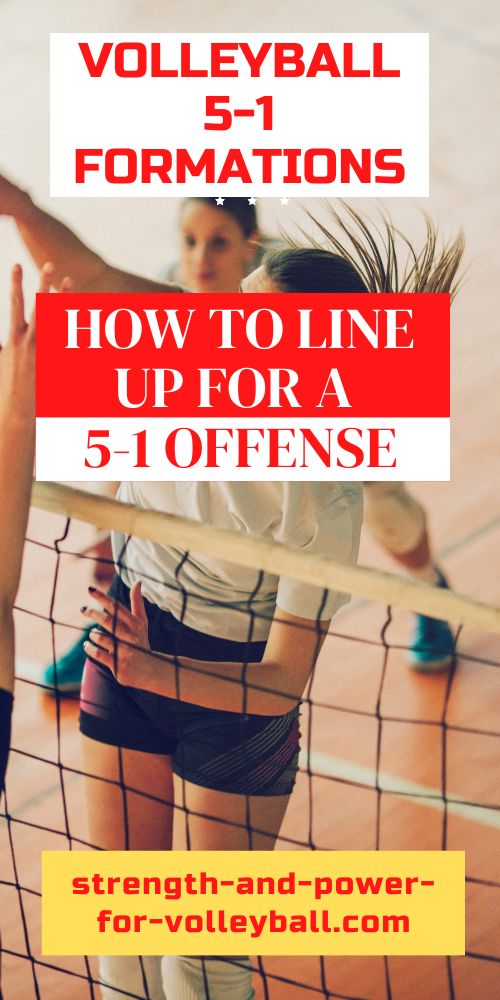