May and Walsh were distinguished as AVP Team of the Year for four consecutive years (2003 through 2006). 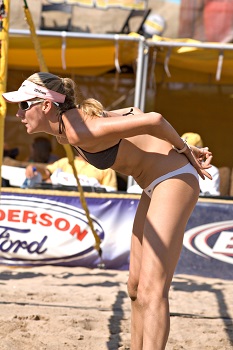 May is the sport's winningest player with 103 tournament victories.

For three straight seasons, Walsh was chosen as the FIVB's Best Hitter, Best Blocker and Sportsperson in addition to collecting the 2007 Best Offensive and Most Outstanding Player awards.

Arguably the greatest volleyball player of all time, Kiraly was a star on the beach for over two and half decades. Kiraly was the leading money winner and top player at American beach volleyball for most of the early 1990s.

Kiraly partnered with Steffes for more than half of his career wins.

Stoklos and Smith are the winningest men's beach volleyball team in history with 114 titles in 235 starts with 203 podium placements and 212 "final four" finishes.

Santos and Rego have teamed to win the most FIVB events (24), including 23 SWATCH-FIVB World Tour gold medals.

Rego is the SWATCH-FIVB World Tour leader in career earnings and gold medals.

Adriana Behar and Shelda Bede have been one of the most successful international beach teams since 1995.

Menges and Lee made the finals in every volleyball tournament they entered together. From 1973 to 1982 Menges and Lee won 25 out of 28 tournaments, finishing second 3 times.

Von Hagen and Lang won 28 tournaments together during an era where there were only 2 or 3 tournaments a year.