Misty May-Treanor is a famous beach volleyball player that plays professionally on both the AVP and FIVB tour.

May-Treanor was born July 30, 1977 and grew up in Santa Monica, California.

After winning a national title and receiving the Athlete of the Year Award in 1998, Misty graduated from California State University, Long Beach where Misty was a First Team All American for three years. 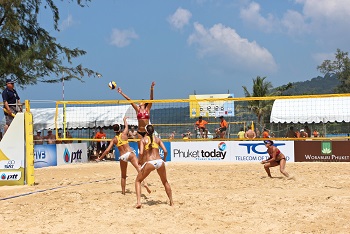 In 2003, May and new beach doubles partner Kerri Walsh were named the Association of Volleyball Professionals (AVP) Team of the Year winning eight tournaments and going 39-0 in match play.

In the 2004 Summer Olympics, with partner Kerri Walsh won the gold medal after not losing a single set in their seven matches.

During the offseason, when Misty isnt training she is the assistant coach at Irvine Valley Junior College.

I think it’s always a tipping point when you decide to retire because this is the only career I’ve ever known. There is definitely a sense of loss like, what am I going to do now?

I got my masters degree in coaching and athletic administration. I’ve always had a plan B. My Plan B has always been coaching. I knew I wouldn’t be out of the game completely.

Today, May and Walsh are one of the most famous beach teams in the world.

Her 1998 College team was one of just three college teams to ever go undefeated in a season.

2005 AVP Most Outstanding Player, Best Offensive Player, Most Valuable Player and Best Team of the Year

2005 FIVB Most Outstanding Player of the Year, Best Offensive Player, and Best Setter

2004 AVP Best Offensive Player and Best Team of the Year

May-Treanor Winning on the Beach

The #1 Ranked Player in the World

Leads the #1 Beach Volleyball Team in the World

Winningest Female in Her Sport