He was master of the Kong block at the net.

When Skoklos would hit, you better watch your face!

Stoklos parents are originally from Poland.

Stoklos has a twin sister Ronda.

Graduated from Palisades High School where he teamed with Rici Lutyes, Dave Sanders, and Steve Salmons. 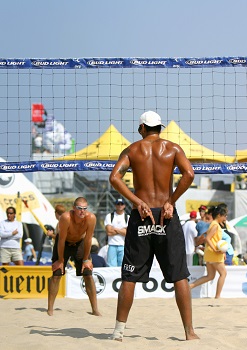 Randy Skoklos as perhaps single handedly responsible for changing the dynamic of the sport with his athleticism and overpowering force at the net.

His success dates back to his first tournament in 1976 at Sorrento Beach, and he has teamed with the top players in the sport in addition to Sinjin and Menges including, Adam Johnson, Brian Lewis, Scott Ayakatubby, and Eduardo "Anjinho" Bacil.

Randy and longtime partner Sinjin Smith were the first team to earn 100 team victories and still hold the record after almost a decade.

He was named the AVP's "Most Valuable Player" four times in his career, and is a four-time winner of the prestigious Manhattan Beach Open.

Randy was recognized as a part of the Greatest Team in the history of beach volleyball by the FIVB and was honored at an induction ceremony in Buenos Aires, Argentina in 2001 where the storied history of the Smith-Stoklos partnership was celebrated by a global audience.

Randy Stoklos began playing beach volleyball in 1974 at Muscle Beach in Venice, California with Joe Gold. He won his first trophy in 1976 and since that time has enjoyed one of the most successful careers in beach volleyball history. Randy was one of the first beach volleyball athletes to earn a lucrative sponsorship endorsement and throughout his career was associated with top companies. He starred in the 1990 Tri-Star Pictures release, Side Out, playing one of the lead roles in the motion picture.

Although retired from professional competition, he continues to compete in local tournaments. Randy resides in Pacific Palisades, California with his daughter, Shay, and son, Shane.

Thoughts on playing at Manhattan Beach...

Coming out of the losers bracket... you better be in shape.

The sand is very difficult to move in.

As the day progresses, the wind picks up.

You have to be mentally stronger than your opponent.

"I got a few stories to tell about Sinjin and myself of feeling those moments of me waving the white flag and Sinjin telling me that that guy feels the same as I do. And I come out here and sideout one more time and sure enough my opponent drops. That's what the sport was like and that's what they're feeling today."