There are 4 basic rules in volleyball you would be crazy not to learn.

It is legal to make multiple contacts on the ball during the first team contact. The contact must be a single attempt at playing the ball to be legal.

If the ball is played twice in succession, it is an illegal 2 hits.

On second and third team contacts, double hits (or multiple contacts) are illegal.

Understanding the rules of volleyball for contacts is very important to having a competitive advantage over your opponent.

Playing Tip
Teach your players to be more aggressive when taking the ball with their hands.

Playing Tip
Players can train themselves to intentionally take the serve and free balls with their hands without worry of being called for mishandling the ball.

Playing Tip
Coaches can make volleyball drills that train players to take the ball with their hands on the first team contact.

Double contacting the ball on the first hit is legal. However, the ball coming to rest (prolonged contact) is still illegal on the first, second, and third team contacts.

Playing Tip
By training players to release the ball quicker you can avoid being called for an illegal contact on first team hits.

Save yourself from frustration with referees

To coaches, players, and fans that don't know the rules in volleyball, it can often appear that the refereeing is inconsistent because of the difference in calling the first, second, and third team contacts.

2. Blocking the ball in the vertical plane

Blockers often think that when the opposing teams setter is setting the ball, the blocker can't interfere with the set. According to the rules in volleyball, this isn't always true.

Players should take advantage of this situation by blocking or attacking the ball to prevent the setter from setting their attackers.

Also, if the setter is a back row player, the rules in volleyball allow you to force the setter to illegally block the ball.

How can I force a back row setter to illegally block?

Playing Tip
Don't always let the setter make a play. Once the ball breaks the plane, hit the ball into the setters hands or arms. Middle blockers should understand this because they are usually the ones that make this play.

If any part of the setters body is above the net when they contact the ball after you hit it, they are a blocker. The rules in volleyball don't allow back row players to block, so this is illegal.

If two opposing players touch the ball at the same time, they are blockers. So the moment the setter and the opposing player contact the ball simultaneously, the setter is an illegal back row blocker. This is assuming part of the setters body (hand) is above the height of the net during contact.

Another situation for playing a ball that's breaks the vertical plane is during an attack hit.

If an attacker is being set and the ball breaks the plane before the attacker gets to the ball, the opposing player can legally beat the attacker to it.

Remember, once the ball breaks the vertical plane of the net, its anyones ball.

The only time it's illegal for the libero to set an attacker is when...

ALL 4 OF THESE MUST OCCUR during the play for the libero to be called for an illegal set attack.

Playing Tip
The libero shouldn't be afraid to set with their hands when they are in the backcourt (behind the attack line).

Playing Tip
Performing volleyball drills where the libero is practicing setting from the back court may not be a bad idea. The libero often has setting experience, so using the libero as a setter for setting out of the back court during broken plays might be a good strategy.

When the libero does use their hands to set attackers, the hitter should be aware of where the libero is setting from. If the libero hand set is coming from the backcourt, the attacker should be ready to jump and hit.

If the hand set is coming from the libero in the front court, the attacker needs to be aware they can't attack the ball completely above the height of the net.

Also train the libero to bump set the ball when they are in front of the attack line.

Coaches often assume it's illegal for the libero to jump and attack out of the back row.

This isn't true. It is only illegal for the libero to attack if when at moment of contact the entire ball is above the top of the net.

So the libero can jump and hit the ball as long as the contact of the ball is made when the ball is partially below the top of the net.

Playing Tip
If your libero is so short that they can't possible attack the ball when it is completely above the height of the net, then the libero could be used safely as an attacker.

Also, when setting the libero, there isn't any point in setting them beyond the attack line. It doesn't matter whether the libero is attacking in the front court or back court, it only matters where the ball is at the moment of contact.

Coaches often get frustrated because they don't know the rules. By understanding the rules, coaches will better understand why officials call what they call and let go what they let go.

Get your team an advantage by making the most out of knowing these 4 important basic rules in volleyball. 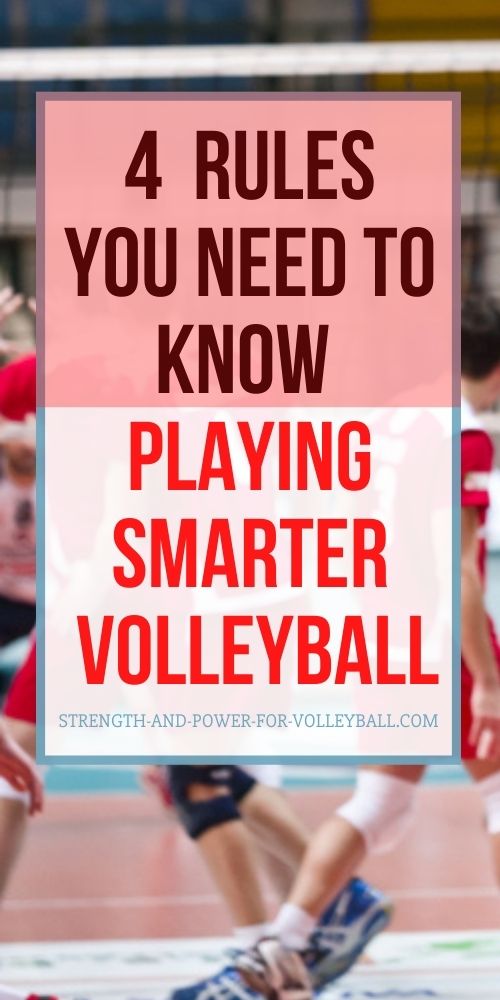