To play great volleyball defense, it's important to have the ability to read the hitter and anticipate where the ball is going to be hit.

A big problem I see with players passing is that they just aren't as ready as they should be to play the ball. They are often surprised by the hit and aren't ready to make a play.

As the play starts to develop on the other side of the net, you should be watching and anticipating what is going to happen.

For example, if the opposing team makes a poor pass to the setter, you should be ready to react and anticipate what the setter is likely to do with the ball.

Reading and anticipating is an important part of defense.

Understanding what your opponent is trying to do will likely give you a big advantage when preparing to make defensive plays.

Even before the ball is served, both your front row and back row players should identify who the opponent's front row hitters are and where on the court the setter is.

Anticipating the plays developing on the other side of the net can give you a huge advantage. Often times players that have average or below average speed and quickness can appear to be fast and quick because they have developed an ability to anticipate and react to what's happening.

Expect the Ball to Be Yours

As a player, develop the mindset that you are going to play every ball that comes over the net. By developing the habit of expecting every ball to come to you, you will be a lot more likely to make a great play on the ball and less likely to shank passes. 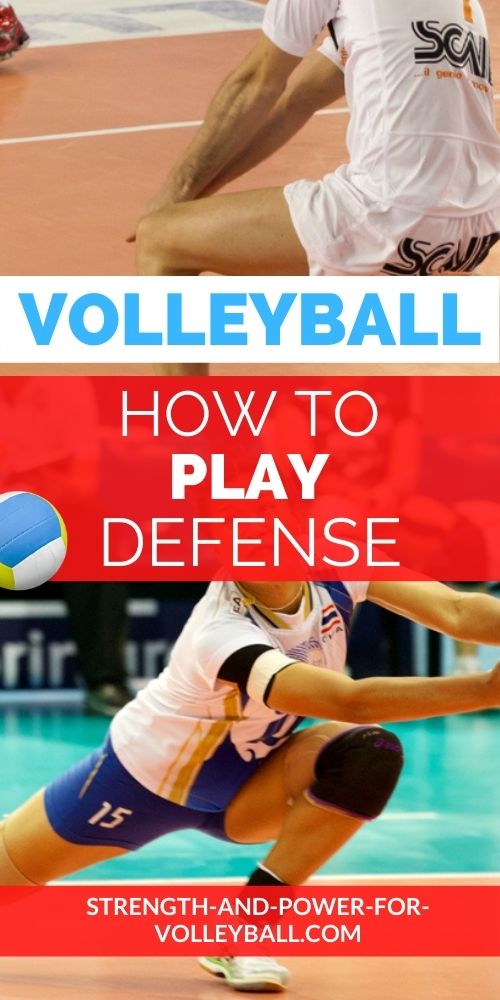 Developing the Right Mindset is Key

I have played a lot of sand doubles.

I believe my doubles playing experience has had a huge impact on learning this volleyball defense mindset.

For example, in doubles, when I'm playing defense, my partner is usually up at the net blocking. I know if my partner doesn't block the ball, I'm either going to dig a hard hit or I'm going to run down a shot. Since most of the time the player blocking doesn't actually block the ball, time and time again the defensive player knows if the ball get's past the blocker they must make the play because there isn't anyone else on the court to help out.

When playing indoor 6's, I believe as a result of playing so much doubles volleyball, I have developed a great ability to anticipate the opponents actions.

For example, when playing indoor 6's, I'm often in the right place to dig because I can read very well the play developing and also the hitter. This comes from having that volleyball defense mindset.

I know a lot of coaches have their players work on digging by hammering balls at them. They just hit at them harder and harder and they just shank more and more. I guess coaches think this is good because they are getting a lot of touches on the ball.

Maybe coaches think that if players have a lot tougher hits at them than they do in the game, then they will be able to pass the balls in the game because they will be easier than what they practice.

I don't agree with this philosophy. Maybe it has it's place somewhere in the volleyball training cycle, but to do this the majority of your practice time isn't going to be helpful. I see this as a waste of time and shanking pass after pass is doing more harm than good.

What you should do is get in the habit of making perfect passes.

Think of every drill repetition as being important. Every single repetition.

First, start with some easy balls and pass them perfect. The point is, in your mind you're either developing good habits or bad ones. So what you want to do is work on passing perfect to a target (person or basket).

You first start out making perfect passes with easy balls, then gradually make the balls tougher to pass.

To develop the right volleyball defense mindset, practice perfect repetition first. If you know what it feels like to pass perfect in practice, you are likely to carry over that feeling to the game. On a subconscious level, you will expect yourself to make great passes. This is key.