Use volleyball passing tips to improve your serve reception.

Passing techniques for serve receive involve passing the ball in such a way that the setter will have time to get there to set any of the available attackers.

In a match of evenly matched teams, the team that passes serves more accurately, often will win. Strategies for passing play an important role to team success.

Get in position early
Every player should be ready to react and move to the ball. The sooner a volleyball passer is able to make a good judgment on the ball, the easier it will be to pass.

Making good volleyball passes is all about making good judgments and communicating with your teammates.

Height of the pass

To run a quick offense, the pass should go no higher than the top of the antennae. Passing to the same height will allow a team to develop a rhythm to their offense.

This will also force the opponents to react quicker to prepare to defend the attack hit.

A less skilled team may need to pass higher to allow their setter time to get to the ball.

Communicating before serve
Establish ahead of time who your primary passers are going to be for that particular rotation.

Decide who is going to call the ball and what teammates are going to help calling the ball "in" or "out".

The whole team should be watching the server and be ready to move.

Communicating during serve
Players should make calls to one another such as "in", "out", "play it", "me", or "mine" as the ball is coming across the court.

It's best to call the ball loud at least 3 times quickly. Mine! Mine! Mine!

When calling the ball for your passer, it may be easier for teammates to not make an "in" or "out" call on balls they are unsure of.

If the ball is yours and your teammates don't make a call, then play the ball, unless of course you think it's out.

It's best to make calls to one another as soon as you can read the serve.

Stable staggered ready position
It is best to be in a ready position for quick starts and quick stops. Knees should be flexed enough to spring in any direction, yet not too much to take away from your agility.

Weight is on the balls of the feet with one foot slightly in front of the other in a balanced stance leaning forward.

Expect the Ball to Be Yours

Once movement habits improve, coaches can train their players at faster speeds than a normal game tempo. It's important to train at faster speeds improves player ability to anticipate and meet the ball earlier.

Anticipate the need to pursue a ball
The whole team, especially backrow defensive players, should track the trajectory of the ball, after every opponent contact, anticipating having to move to play the ball.

When pursuing the ball, if a player can't get there early enough to stop and get in position, she should do a run through technique for playing the ball.

Sometimes you may get a bad read on a ball. In these instances, it may be necessary to perform defensive techniques such as sprawls and pancakes.

Being off balance in anticipation
It's important to train being off-balance and leaning in the right direction early.

The reason this may be better than being in a balanced position is because the player is going to get in that off-balance position anyway when they take the first step in anticipation.

For example, leaning forward in anticipation of a ball dropping in front of you gives you more time to get there to play the ball.

Anticipate the Ball Coming to Your Way

Watching the server is critical to getting a good read on the ball.

By paying attention to where the server is standing and watching their toss, you can predict where they are going to serve. Servers often like to serve the same spots every time they go back to serve.

Be aware of what serving strategies a server has used in the past to help anticipate what serve may be coming.

Get a good read on the three most popular types of serves...

Cushion hard driven balls
Passers can use the technique of relaxing the shoulders to absorb the contact of hard driven balls. You can even slowly take steps back and lean backwards to help absorb contact.

Whether you prefer to pass with your forearms or hands, all players should developing various skills for passing. Often players will have to react at the last second and quickly decide how they are going to play the ball.

Passing the seams
Deciding on who passes balls served between two players can be difficult.

Passing "the between ball" can be broken down into two parts. 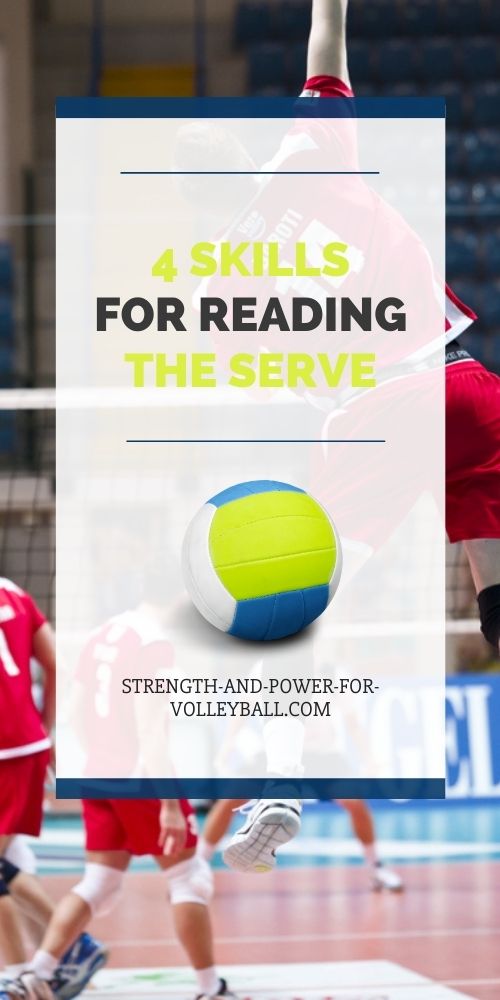