Keys to winning volleyball are consistent play, making adjustments during the course of a match, and building momentum.

How to Play Smarter Volleyball

I would like to share with you some of my strategies I personally use to win games.

These strategies are specific to doubles, but the same philosophy can be used for playing indoor 6's, 4's, coed, etc.

If you use these strategies I believe you can beat teams that are more athletic, talented, and experienced than you.

Usually, a common trait the best volleyball players have is predictability. 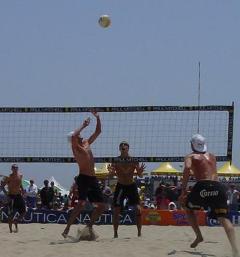 If your opponent is predictable, you can use the following two strategies to give yourself an edge...

You should always have a strategy when you play.

Even if it's not a great strategy, just having a strategy (or a plan) is better than not having any at all.

Always Have a Strategy

Even if you are about to start the game and don't know your opponents strengths and weaknesses, it's better to just make a plan for how to play them rather than playing without one. Even if you don't have a strategy prepared, you can still experiment during the game to see what works.

Again, really good players are predictable. Good players have a strategy. What you should do is figure out what their strategy is.

For example, in doubles, if you are playing against a player that loves to hit the ball cross court every time, have your partner block angle.

If the hitter tries to hit cross court and you give them trouble, you will likely force them to do something else. If you're blocking angle, you could also have your partner play defense in the angle to force the hitter to hit line. The point is to force your opponent to do what they don't want to do.

If you enjoyed these tips and would like to keep it close to you at any time, just save this pin to your Pinterest Volleyball Board. 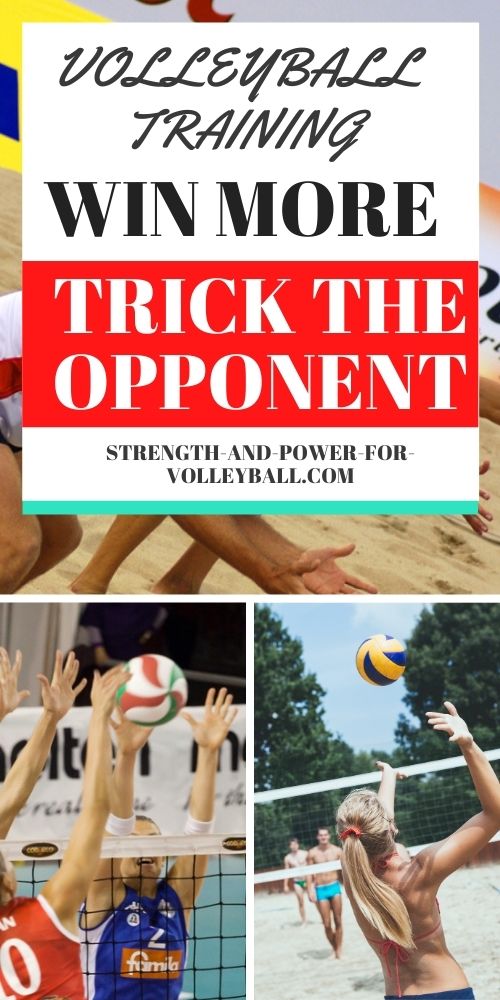 Getting Your Opponent to do What You Want

Let's say you don't like to be served short. Maybe you're real tall and have trouble passing short serves. So one strategy could be to make them think serving you deep is a better strategy. Line up in serve receive closer to the net so they won't want to serve you short because it will look like you have that area covered. 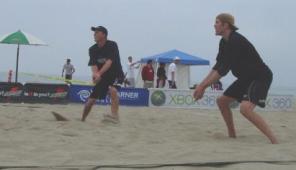 Another example of your opponent doing what you want...

Assume you're a a left side player.

Let's say you would like it to be easier to get outside to hit. What you could do is line up closer to the middle of the court.


The server will likely see you giving away a lot of line, so then they might try to serve you tough down the line. This is playing into your hands because this is where you'd like to receive the serve...near the sideline so you can take a bigger approach outside to hit.

The point is to try to get the server to do what you want.

If they do what you want, they are more predictable. They play into your hands.

The best players are the ones that are the most consistent.

Create a plan for how you are going to defend them.

Having a consistent game is good, but the downside of being consistent is the fact that the player is more predictable.
This is when being deceptive becomes really important.

By playing deceptive, it makes it much harder for your opponent to read what you are trying to do.

If you're consistent, you're likely predictable. If you're predictable, this is when being deceptive becomes really important.

Imagine if you are able to do all your favorite hits and your opponent isn't able to read you. If you are deceptive when you hit, you're going to be hard to stop.

Making your opponents change their game to do what you want has everything to do with making adjustments.

If what you're doing isn't working, it's almost always a good idea to try something else.

For example, if you get blocked every time you swing hard, mix in some shots. Or if your opponent runs down all your best shots, swing hard to mix things up.

This is why it's so important to develop different hits. If something isn't working then try something else.

Be deceptive to make it difficult for your opponent to know what's coming next.

I often hear players say things like, "I play better angry". Or they tell a teammate,"Come on, I need you to yell at me. I play better mad".

I believe that when things aren't going well, anything different is better. It's easy to get stuck making the same mistakes over and over again. You must adjust your game.

What many players don't realize is that often the reason they play better upset is because by becoming angry they are changing their emotional state (they adjust their attitude).

For example, if you shank every serve, one after the other, any kind of adjustment you make is better than what you are currently doing.

So by becoming upset about how you're playing is a way of adjusting your game. By changing your emotional state, you're making an adjustment.

So do I think it's a good idea to get angry or upset if you're not playing well?

Personally, I don't think it's a good strategy to play solely on emotion.

I think it's much better to play under control and have an awareness of what's going on. I think becoming emotional can be more of a distraction to what you're trying to do and make you a more predictable player.

The difference between winning and losing isn't usually talent, skill, or experience. Quite often any given team can win on any given day.

I think a big factor in whether your team wins or loses is momentum.

When your team has momentum, everything is going your way. What you're trying to do is working. When you have momentum you have confidence.

I see momentum as getting in a rhythm and doing what works over and over again.

If you are able to continuously make your opponent do what you want them to, you have momentum.

If you lose momentum, you can steal it back by adjusting your game and winning the next rally. Playing with a strategy is key to being able to effectively take away and keep momentum.