Playing Volleyball Out of Your Mind
Playing in the zone, dominating on the volleyball court

I'm sure you've heard people describe a player playing volleyball at their best...

"She's playing over her head."

And my favorite, "He's unconscious; he doesn't know what he's doing."

Have you ever been, in the zone?

I remember watching Michael Jordan one time playing in the zone.

One night he made one three point shot after another. He couldn't miss.

After one of the three's, he turned to his teammates standing at the bench and just shrugged his shoulders and smiled as if to say, "I have no idea what's going on".

You could say he was feeling it. 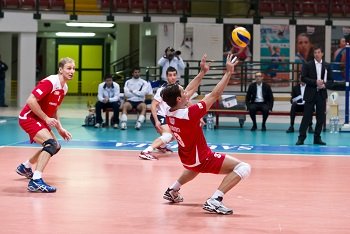 The best athletes know that their peak performance never comes when they are thinking about it.

The Key is You're Not Thinking, Not Over-trying

When you're in this state, you are literally, "out of your mind". You're not thinking.

For instance, you know where you want the ball to go, but you don't have to try hard to send it there. When you're in this state, what you want just seems to happen, often times with more accuracy than you were hoping.

This "hot streak" lasts until you start thinking about it and trying to maintain it. As soon as you try to maintain control, you lose it.

Tip: To test this theory, the next time you're playing volleyball and you see your opponent "in the zone", talk to them about it. For instance, if you are playing against someone that is hitting the ball down the line real well, you could ask them about it. You could say something like, "Wow Kelsey, you're hitting the ball down the line really well. How are you able to do hit so well"? If she takes the bait, she'll begin to think about how she's going to hit, and start telling you about her technique for how she approaches, jumps, and hits the ball. If she does this, her hot streak will likely start to end.

7 Sensory Factors Important to Being in "the zone"

During your times of excellence, you have 7 sensory factors that are present.

When you're playing volleyball your best, ask yourself, what do you see and how do you see it?

2. What do you feel and how are you feeling it?

Some great athletes say they feel this "mobilized calm" when they are in the zone.
This is likely how Michael Jordan felt when he was playing in the zone.

Take a look at how Walter Payton describes being in the zone...

3. What are you saying to yourself?

When you're in the zone, what's your inner communication? What are the ideas, thoughts, and inner dialogue that's moving through you?

4. What are you expecting?

It's important for coaches to ask their players how they expect to play that day. If players aren't ready to play, the coach needs to help the player get the right mindset and be ready to play. If your player says, "I expect to play well", this isn't good enough. Be specific about what you expect.

5. Reflect the same facial expression that you would when you're in the zone.

6. Project the images that you have in your mind when you're in the zone.

7. How are you breathing when you're in the zone?

How does your heart beat? Is it fast? Is it slow? How's your blood pressure?

These 7 factors work together and are unconsciously aligned.

This is important to understand...

Because these factors are aligned together, they collectively produce the excellence you express when you're in the zone.

Just as you practice to develop and sharpen your volleyball skills, you should practice and develop your mental skills.

Volleyball › Volleyball Strategies › Playing Out of Your Mind