This volleyball drill consists of a player doing a block jump up to a ball that another player is holding on the opposite side of the net.

The purpose of the drill is to work on good technique with hands in proper position.

For example, lets say a blocker is working on correct blocking technique for blocking a left side hitter. To make the blocker block a ball hit down the line, the person holding the ball can move the ball to the blockers right.

The blocker then gets in position and jumps up to block line placing the hands into the correct blocking position (blocking line).

Use the same idea for blocking angle, performing a spread block, blocking a tight set, etc. 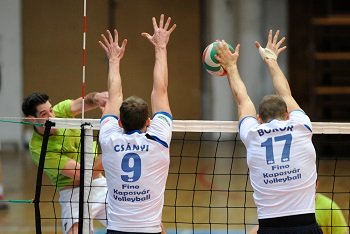 This volleyball drill needs two blockers, one on each side of the net. One of the players performs a blocking movement and the other player mirrors the movement.

This drill can be used for specific blocking movements.

For example, middle blockers could mirror one another.

Start from the middle and either perform a block jump or move laterally to block an outside hitter.

The player mirroring is working on reacting to their partner and also mimicking proper blocking technique.

Start with a player on each side of the net. The coach tosses a ball ball up so it will land on top of the net. The players have the choice of blocking or trying to push the ball through the block.

The point is to work on winning the "50/50" ball. Players will find that it's often thesecond player that pushes that wins the joust.

Small players commonly win the jousts because they have to push up and forward while taller players try to push forward and down. This gives the smaller player the mechanical advantage.

Players should develop their own unique strategies for trying to win a joust. A common technique for jousting is to just hold your ground when you first make contact, wait, and then push through.

To work on footwork and timing the block.

Coach stands on a box with a player on the other side of the net.

The coach tosses the ball to them self and hits the ball over the net. The player jumps up to block and really concentrates on good blocking form.

This volleyball drill is good for working on timing, reading the armswing, and getting used to what it feels like to block balls.

When performing volleyball blocking drills, the blocker should remember to work on penetrating the net and getting both hands on the ball.

A middle blocker can be added to the volleyball drill to work on team blocking.

This drill has both the hitter and coach standing on boxes on opposite sides of the net. Just as the previous volleyball drill, the coach is hitting into the block.

The purpose is for the blocker to work on blocking with good form. The blocker should be angling their hands and arms so that when the ball is blocked it rebounds off the blocker into the court.

Benefits
This drill is able to be done without blockers becoming tired because they aren't jumping. Since the blocker is standing on a box, timing the block isn't an issue.

The purpose of this volleyball drill is to work on closing the hole between blockers. You need a setter and hitters in a hitting line with two blockers on the other side of the net.

The coach tosses balls to the setter which the setter sets to an outside hitter. The hitter must try to hit between the blockers every time they hit.

Any balls that are blocked into the other court count as a point. At 5 points rotate.

Variations
At first, the middle and outside blocker can start the drill by standing next to one another, so timing is less of an issue.

After the blockers become comfortable, have the middle blocker come from the middle, like they would in a game. This will make sealing the hole much more difficult.

This volleyball drill can also be done with 3 blockers, so the middle has to choose which way to go. First, start with high sets to the outside and high sets back, then gradually have the sets be more game like. 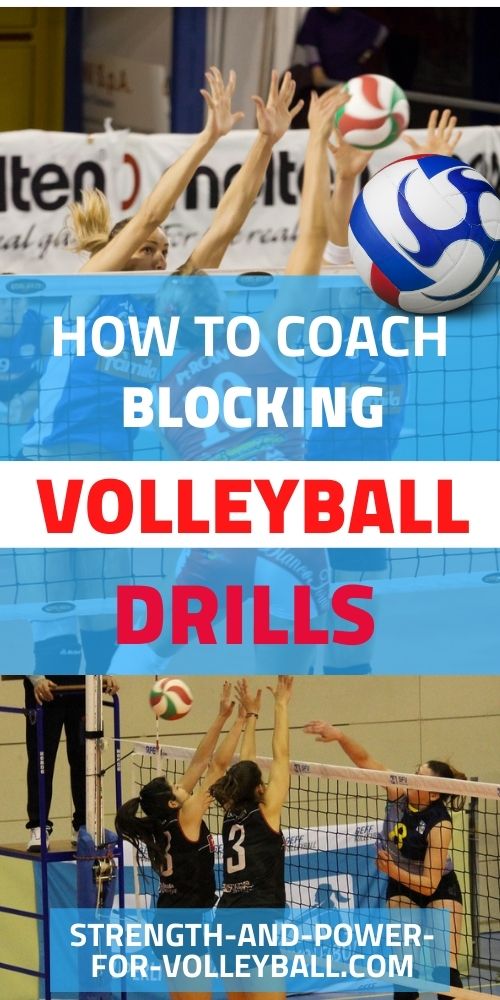