How to Block in Volleyball
Strategies for Blocking and Defense

Tactics to block in volleyball vary team to team. For some, the block is the primary method of defense. For others, blockers may be used effectively to take up space diggers aren't defending.

Who do you want to play the ball, blocker or digger?

"The Read" Strategy to Block in Volleyball

Blocking the ball by reading can cause hitters to make poor decisions and give diggers easier balls to dig and easier shots to chase down.

Disadvantages
If the blockers get a bad read on the ball, often times the ball will ricochet off the hands in a way that makes it unplayable for the defense. Also, even if they do get a good read, if blocking technique isn't good, they may not get many blocks.

"The Area" Strategy to Block in Volleyball

When in blocking ready position, which is better, arms up or down?

It's generally a good idea to have your arms up ready to reach above the net to block a quick set. Also, in order to develop a consistent blocking movement at the net, it's best to keep your arms up.

So, as you use the volleyball strategies 3 step cross over or the 2 step lateral, you can develop a more consistent flow and rhythm when moving to block. It should almost be like youre approaching to block, in the sense that there is consistent flow to each time you move to block.

On the other hand, you can develop a technique to use to jump higher by using your arms when blocking, called a swing block.

Swing blocking is an effective way to use your arms to jump higher when blocking. To swing block to the left, move both your hands down to the left side of your body as you move to the left. As you plant to jump, squat down facing left.

Then jump up and swing your body to the right to face the net penetrating your hands and arms over the net.

How to Block in Volleyball

Soft block
If you are up against a big hitter that time and time again hits the ball over you, you might try soft blocking. A soft block is blocking the ball in a way where you are just trying to keep the ball in play.

This is usually done by reaching high and back when blocking to deflect the ball up so your teammates can make a play. These volleyball strategies are often used by teams with short blockers.

Back row players can also do this as long as when they make contact with the ball there isn't any part of their body above the net.

So if a back row setter is chasing after a tight pass, they can turn and legal block the ball below the top of the net. This is used most often when the setter is just trying to keep the ball in play by not letting a hitter bury the ball straight down.

But remember, since this isn't a block, it's your teams first contact. So you only have two contacts left to get the ball up and over.

This is best for when you have a hitter that repeatedly hits the ball sharply around a teams block.

Solo blocking
Blockers need volleyball strategies for when they get stuck blocking alone.

A solo blocker is often successful by either...

3 Strategies to Solo Block in Volleyball

One Hand Clamp Block in Volleyball

A one hand clamp block is best for when the set is tight but not tight enough to get two hands on the ball. You basically want to get to the ball the same time or a split second after the hitter does.

Reach and get your whole hand around the ball as the hitter is hitting it. If you've been having trouble blocking a particular hitter or are really good with the joust, this can be an effective strategy. Volleyball strategies for blocking with one hand should only be used if the sets not tight enough to get both your hands on the ball.

Of course, it's always a better strategy to block with two hands. Blocking with one hand is an advanced technique and may be best only used to surprise or intimidate an attacker.

When in doubt... jump up and penetrate

As you jump up to block, reach your hands over the net angling your palms down. Angle your arms and hands so that when the ball hits them the ball ricochets into your opponent's court.

Don't worry about bigger hitters that hit over you. If they practice hitting straight down in warm ups, they'll want to do it in the game. These are the attacks that blockers with good form will block. 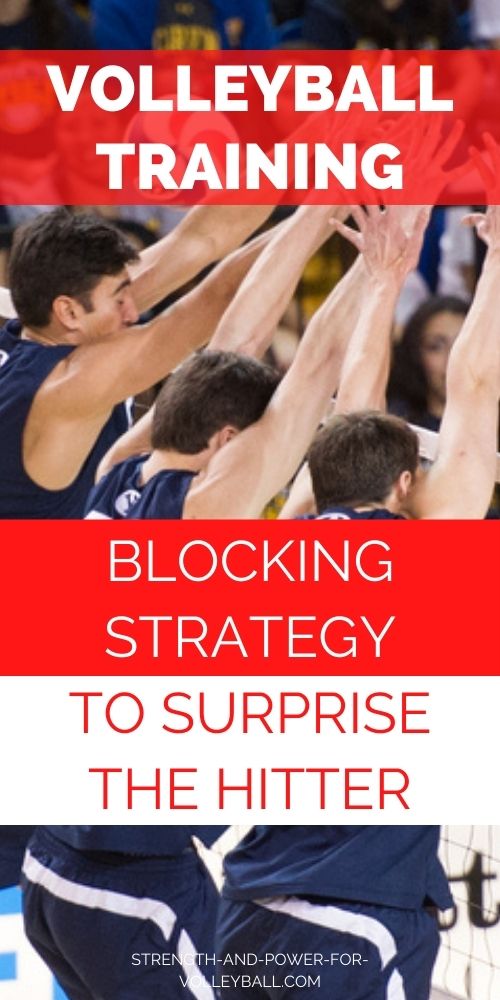