Volleyball setting drills for coaches and players. One of the many responsibilities of a coach is to give every player on the team a chance to develop their volleyball skills.

Everyone on the team should work on setting skills because at one time or another, everyone has been in the position where they had to set a ball on a broken play.

With the goal of putting your team in the best possible position to attack, it's to your advantage to have all players practicing setting a volleyball, developing clean and consistent sets.

Volleyball Setting Drills are not only good for setters, but also the rest of the players on the team. 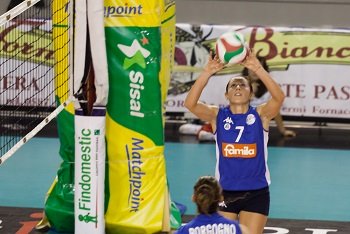 The purpose of this drill is to work on the proficiency of setting.

This drill involves a player standing on a box or chair in the area the set is suppose to be set to. The player on the box should have their hands held up to the height that an attacker would be attacking.

Variations The setters can be tossed 10 balls at a time to get into a rhythm setting.

Once the setting mechanics has become more consistent, the sets should be executed off of their teammates passes.

Benefits The setter can get a better feel for how consistent they are setting if they set to a stationary visible target. This drill is good for all players for developing consistent sets.

Setters need to develop the ability to see their opposing blockers movement before setting.

You need a tosser, a setter, and a middle blocker for this drill.

This volleyball setting drill starts with the coach tossing the ball up to the setter from the backcourt. Just before the ball reaches the setters hands, the middle blocker takes a step either to the left or to the right.

The setter then sets the ball in the opposite direction of the blocker's movement. This trains setters to be aware of what their opposition is doing which results in making better decisions setting.

Benefits This drill is good for training a setter's peripheral vision.

This is another drill that trains setters to see the defense before making a decision on where to set.

Start with your setter at the net with the coach on the other side of the net along with a tosser for tossing balls to the setter.

As the tosser tosses, the coach points to where they want the setter to set middle, outside, or back.

Benefits The setter learns how to use their peripheral vision. Being able to see the opponents defense can be a great advantage to running an effective offense.

This drill involves a setter going back and forth under the net setting for both teams.

This volleyball setting drill starts by the coach tossing a team a free ball. The ball is passed up to the setter and the setter runs a play. The hitter places the ball deep by tipping, hitting a high arcing shot or taking the ball overhead with the hands. This gives the setter a little more time to get to the other side of the net to get ready to set.

Benefits This drill is good for conditioning and training the setter to concentrate on getting in good setting position.

Start with 2 players on each side of the net. The players should start by standing at the sideline facing each other.

On the coaches signal, the players set a volleyball back and forth over the net. Between each set the players take a couple steps sideways toward the other sideline.

The rest of the team can follow them. Once everyone has reached the sideline, repeat the drill back to the other side.

Benefits This volleyball setting drill is more for beginning players. The whole team is able to get many repetitions setting the ball in a short amount of time. 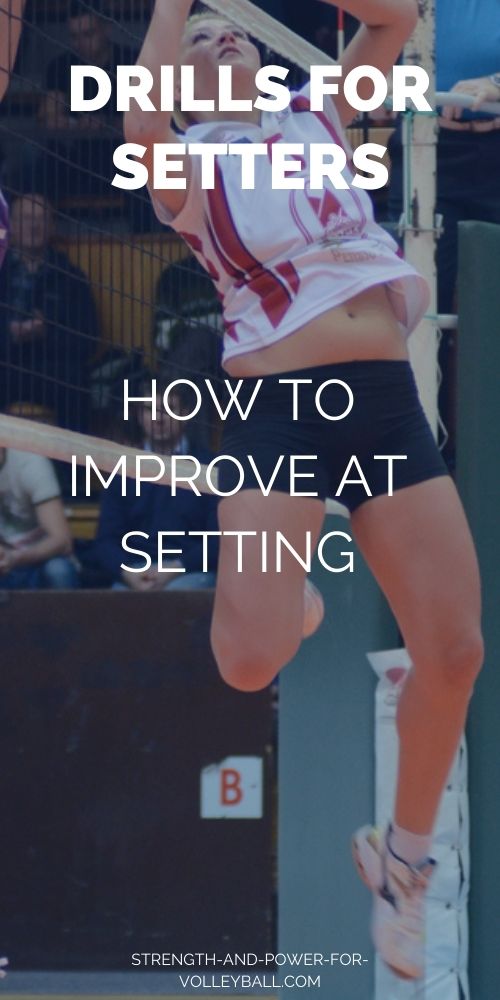