When it comes to serving a volleyball, every player should have skills for effective serving. The following serving techniques are for a right handed server. Use opposite feet and hand positions for serving left handed.

A float serve is serving the ball in a way that makes it move so that it is harder to tell where its going.

The ball is harder to track and passers must focus harder to volleyball pass the ball.

Typical characteristics of a float serve are...

Basic Mechanics of Serving a Volleyball

A float serve may be effective because...

Basic mechanics of the float serve...

The basic volleyball skills of serving...

Contacting the ball for Serving a Volleyball

You want to contact the ball in a way that makes it not spin for it to have a chance of floating. However, just because the ball doesn't spin doesn't mean that the ball will float.

By contacting the ball when it's not moving in the air (rising up or coming down) is when you have the best chance of making a firm contact to make the ball float.

So, after tossing, make contact with the ball at its highest point, hitting the ball firmly with the palm of the hand.

Contacting the ball so that it doesn't have spin as it travels over the net also allows it to get there sooner.

This makes it more difficult to pass because your opposition has less time to react to pass the ball.

When thinking of volleyball skills for the serve, an important skill often overlooked is the toss. Consistent serving may be easier to develop because of good tosses.

Drag the back foot
Drag your back foot by sliding your toes on the ground as you're serving. Dragging it allows you to keep your body in the right position during the serve. 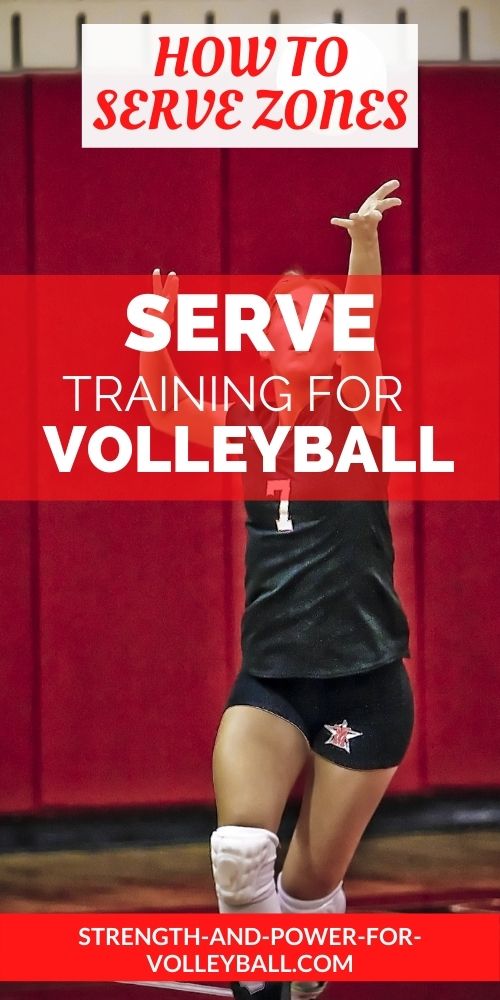 Many jump serves are successful just because players aren't used to passing a serve with topspin. A ball served topspin may drop quickly and if players aren't paying attention, they are caught off guard and aren't ready to move forward to pass the ball.

On the other hand, jump serves can be easier to pass than floaters. The ball typically comes in more of straight line to passers and players can develop confidence passing topspin serves that come right to them.

Basic mechanics of the jump serve...

Serving a Volleyball to Zones

Serving spots may be the easiest and most effective way to serve passers that have good passing skills.

Volleyball skills for spot serving
Sometimes it can be difficult getting floaters to go where you want them to. Often it is easier and more effective to serve particular spots on the court without floating.

Spot serves are different from float serves in that it isn't as important to get the ball to float. You can make it difficult for the other team just by making them move and pass a ball from a spot they don't want to.

You will have a big advantage serving if you can serve the ball wherever you want. There may not be an easier way to frustrate good setters than to make them run around the court chasing bad passes.

Knowing your opponents strengths and weaknesses and offensive strategy will help the execution of effective serving.