How to Pass a Volleyball
Basic Terms and Technique

Volleyball terms for learning how to pass a volleyball.

Passing is one of the six basic techniques players must learn to be successful at volleyball.

There are two basic ways to accomplish a volleyball pass - passing using the forearms or passing overhead with the hands.

Bump Pass
Bump pass is a slang term for forearm pass. A forearm pass is done by joining the forearms together to pass or set a ball in an underhand motion.

The forearm pass is a ball handling skill that players use to legally contact the ball at about waist level using the forearms as the contact surface. This pass is made on balls that are too low to take overhead with the hands. 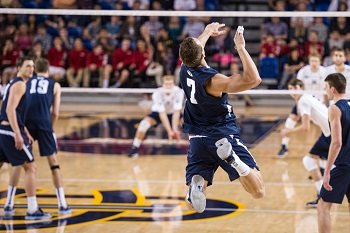 Overhead Pass
An overhead pass is a ball handling skill used to direct the ball to the target by contacting the ball with both hands. The ball is played up overhead using a setting type motion.

Using the hands to play the ball is often preferred over passing with the forearms because the hands have greater ball control.

Free Ball Pass
A free ball pass is made on an easy ball that comes over the net to your side of the court. Because the ball is easy to play, the free ball is usually played with the hands using an overhead passing motion.

How to Pass a Volleyball Skills

Midline Passing
Passing the ball through the midline of your body is probably the most popular passing technique. The goal is to get behind the ball and face in line to where you are trying to pass.

This is similar to linear passing where you take the ball close to the center of your body.

Angle Right Passing
Angle right passing is when the player tries to get behind the ball and pass it to a target to their right.

Angle Left Passing
Angle left passing is when the player tries to get behind the ball and pass it to a target to their left.

Tandem passing
Tandem passing is similar to midline passing. Basically the difference is with tandem passing you are trying to pass the ball much closer to the body than with a traditional midline pass. The idea is, the closer to your body you contact the ball, the more control you should have passing the ball.

Basics of the Pass