Whitmarsh picked up the game much later in life than most professional athletes. Loved by many players and fans, Whitmarsh displayed tons of positive energy on and off the court.

The best way for me to put it is that we played together for six years. When you play together for that long on the beach, you go through everything together," said Dodd, who initially partnered with Whitmarsh in 1993. "In the end, you are much more like a brother than a friend or a fellow competitor. Mike was like my brother." -- Mike Dodd

Mike Whitmarsh and partner Mike Dodd were silver medalists at the inaugural mens olympic beach volleyball competition in 1996 in Atlanta. They received the silver medal while fellow Americans Karch Kiraly and Kent Steffes took the gold.

"I don't know if you will find in all of sports someone who was better liked by all of his peers, meaning competitors..." "...that's very rare to find, especially in a sport like beach volleyball when everybody is going after each other for prize money."
-- Karch Kiraly 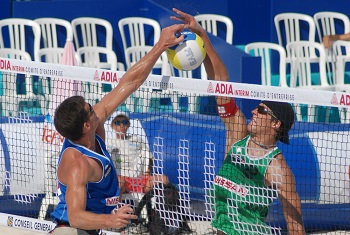 Whitmarsh earned more than $1.4 million in his domestic pro beach volleyball career, winning 25 titles, which placed him sixth on the U.S. career earnings list. AVP Rookie of the Year in 1990. At 28, was named Best Blocker on the AVP in 2002


"He was an incredible athlete...in his prime, he was getting up higher and hanging longer and doing more things at the net than anyone. But what was really incredible was his quickness and speed."
-- Mike Dodd

Mike Whitmarsh spiking at the net

"When we first saw him we all thought, Oh my God, who is this guy?.....he was taller and longer and jumped higher than anyone we had seen. But he didn't know how to play volleyball. He didn't have an arm swing. He moved to Manhattan Beach and paid his dues.
-- Mike Dodd

"He started with a real disadvantage.....but picking up the sport as late as he did to become one of the best in the world is a mind-boggling accomplishment."
-- Karch Kiraly

"At 6-foot-7, he was one of the original big men in what used to be a sport with no big men...he paved the way for the Phil Dalhaussers, Mike Lamberts, Matt Fuerbringers and Jeff Nygaards. He gave hope to big men everywhere."
-- Karch Kiraly