Here are some basic volleyball terms. Knowing these terms will help out your understanding of the game.

Free ball
An easy ball that is returned over the net by a forearm or overhead pass. This ball is called free because its a free opportunity to pass, set, and attack the opponent.

Pepper
Peppering is a warming up drill between two players. The players hit the ball back and forth to one another using the main skills in volleyball pass, set, and hit. This is a common warm up drill because all you need is a ball and two players. No volleyball net necessary.

Side out
The side out is one of the basic volleyball terms used in old school volleyball. Today, a side out is called, "point on serve receive". In the olden days,  when the team that receives the serve wins the rally, this is called a sideout. When a team sides out, they must rotate and the right front player is now the new server. 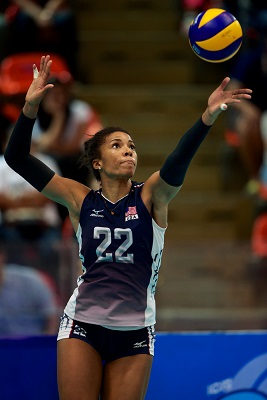 Six-two offense
A volleyball offensive system that includes 6 hitters and 2 setters. The two setters play opposite one another in the rotation and each set when they are on the back row. The 6-2 has the advantage of always having a setter set coming from the back row. This leaves the other setter on front row free to attack the ball. The disadvantage of the 6-2 is this offensive system is the setter can't attack at the net. Passers also need to be careful they don't pass the ball too tight because this puts the setter at risk for illegal back row blocks and illegal back row attacks.

Court Strong Side
The left side of the court is often referred to as strong side because it's usually easier for right handed players to attack for the left side.

Court Weak Side
The right side of the court is often referred to as weak side because it's usually less effective for right handed players to attack for the right side.

If you enjoyed this info on the basic volleyball terms and would like to keep it close to you at any time, just save this pin to your Pinterest Volleyball Training Board. 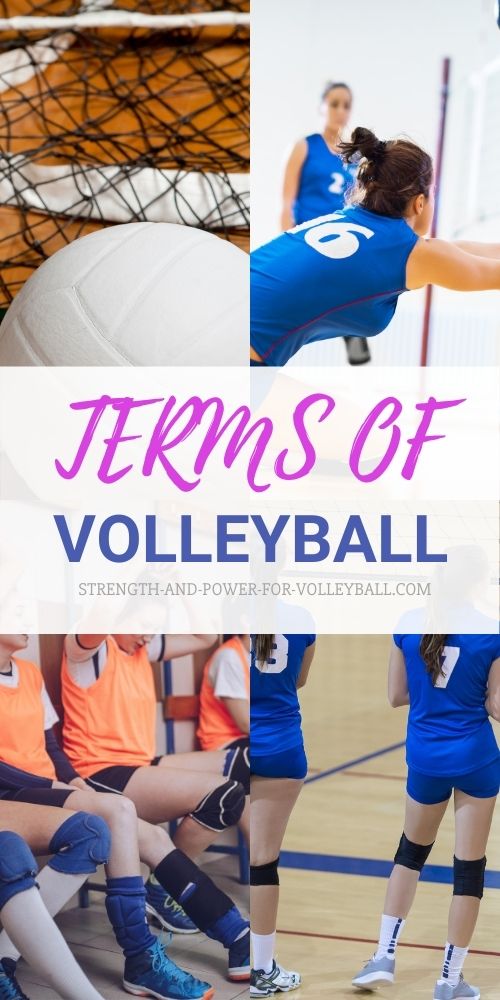 Four
A high outside set. This is usually the main set in a volleyball offense.

Five or Back
This set is much like the four set, except this set is set back to the weak-side hitter.

One or Quick Ball
This a quick set that set to the middle of the court. This set is set low and timing is critical. This play is usually run so the middle hitter can catch the opposing blockers off guard.

Back-One
This ball is set low and quick like the ONE set except this set is set back behind the setter.

Front Two or Two Ball
This ball is a higher set in the middle of the court. Timing is less critical on the two ball. This play is usually run usually in combinations with other quicker plays such as back ones and out side shoots to make it tougher for opposing blockers to successfully block.

Back-Two
This set is like the Front Two except the ball is set behind the setter.

Pipe
Set the pipe is done by setting a back row player that jumps and attacks from behind the attack line. A pipe may also be called a ten set.

Shoot
A shoot is basically a quick set to a hitter hitting outside. This set is low with the ball traveling with a low arc and quick. Because of the speed the ball is traveling, timing becomes a factor to executing the play effectively.

Slide
A slide is where an attacker takes an approach and hits the ball after jumping off one foot. This is usually done by a middle hitter faking a quick approach to the middle. After faking the approach, the hitter takes steps along the net chasing the ball that travels behind the setter and then jumps parallel to the net off one foot and hits the ball as they are gliding through the air.

Three Ball or Thirty One
A three is much like a shoot except the set goes about half way to the outside. Its basically a shoot to a middle hitter.

Thirty-Two
A thirty-two is basically a slower and higher thirty-one set.

Spike
A volleyball spike is an offensive action a player makes by hitting the ball with the hand by using a one-arm overhead swinging motion, attempting to get a kill.

Dig
A defensive player making a play on a ball that is attacked by the opponent. A dig is a defensive play made on a hard driven ball.

Double contact or Double
A double contact is when a player contacts the ball with two body parts consecutively.

Mishit
A mishit is when a player swings and hits the ball but doesnt contact the ball as intended. The result of a mishit is the ball is hit at a different speed, direction, or spin than was intended which results in an unpredictable hit placement.

Shank
A shank is when a player unintentionally passes a ball in a wild manner, making the ball unplayable for the setter to make a play on the shanked pass.

Dump
An attack that is used to surprise the opponent. This play is usually executed by a front row setter. The attack catches the opponents defense usually is ready for an attack from the setter because the setters main job is to set attackers. Be alert of when you are up against left handed setters because this is a play that left handed players are in good position to make.

Pancake
The pancake is a desperate attempt to keep the ball in play. A pancake is done by extending the arm out in front the body after diving. The goal is to get the ball to bounce up off the hand to make it stay in play.

Sky ball
The sky ball is a unique underhand volleyball serve in which the ball is swung at and hit unusually high in the air above the opposing team's court. This is usually done in outdoor volleyball, attempting to make it difficult for the receiving players to pass.

Getting Tattooed or Facial
Getting Tattooed is when a player cant get out of the way of an opponents hard driven ball. A facial is the result of getting hit in the face by a hard spike.

Jungle Ball or Picnic Ball
Jungle volleyball is a game played by inexperienced players with little ball control. This type of volleyball is usually played at church picnics or family barbeques.

Flipper
A flipper is a play on the ball by reaching out and contacting the ball with an outstretched back hand in a flipping motion.

Gator
A Gator is defensive digging technique popularized by beach volleyball players. The defense technique is used on hard hit balls. The play is called a gator because the hands are formed into the shape of 2 gator jaws. Two open hand digging volleyball skills involve digging the ball first with the bottom hand and then directing it with the hand on top.